Paris Jackson has got a new set of friends - the Kardashians. Just last weekend, the celebrity was seen hanging out with Kris Jenner and Kourtney Kardashian at a pre-Grammy Gala show.

Paris Jackson was wearing a riveting, low-cut, lace Tadashi Shoji dress at Clive Davis' Pre-GRAMMY Gala last weekend, according to ET. It showed the actress with a number of tattoos all over her body. She was joined by her friend and actress, Caroline D'Amore, and posed for photographs with Kourtney Kardashian and Kris Jenner.

Moreover, Paris Jackson has been appearing in Hollywood too. However, her behavior doesn't get the approval of her friends and relatives, who would prefer that she spends time getting ahead with education, rather than Hollywood. However, she has different ideas.

Paris Jackson is also trying to make a splash in the entertainment world. She uses her Hollywood links to bag some television roles. The latest one is in "Star," Lee Daniels' Fox drama

So far, the Jackson family has avoided Hollywood. Paris Jackson and her siblings have kept away from the silver screen - an attempt that Michael Jackson made before he died in 2009. However, Paris seems to be getting there. She is busy on Twitter as well as Instagram, sharing her tweets as well as photographs. Calling herself a "model and actor" in her brief biography on her social media pages, Paris Jackson seems to be ready to climb to stardom.

It was an interview with Rolling Stone magazine last month that catapulted Paris Jackson into the limelight. She explained to the publication that she is convinced that her father Michael Jackson has been killed. She herself has gone through depression. She was assaulted many years ago and tried to commit suicide many times.

Paris Jackson's time with the Kardashians seemed to be a stage for her coming of age in the Hollywood world. While she was keeping time with famous personalities at The Beverly Hilton on Saturday night, Michael Jackson's one and only daughter seemed to be ready to spring into the tinsel world. 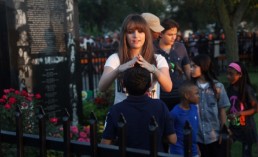