T.I. has spoken out about what could have really ended his marriage with his estranged wife, Tiny Harris, on social media.

The rapper, actor, and reality star wrote a subliminal message on Instagram that has already gone viral just hours after he posted it.

He shared a meme that reads, “I walked away because you were too busy finding faults in me, while I was too busy overlooking yours…”

He added the caption, “But it’s still all love.”

His post comes just after the series finale of their hit VH1 show, T.I. & Tiny: The Family Hustle aired.

The entire season, including the final episode, revealed and confirmed so much about T.I. and Tiny.

In the series finale, she confronted him for cheating on her with a woman. But not just any woman, it was someone who Tiny had hired. But T.I. hinted, just like he did in his Instagram post, that Tiny wasn’t completely innocent either and brought up the night she was caught getting close and dancing to one of his arch enemies, professional boxer Floyd Mayweather.

In the clip, the two went back-and-forth about whose wrongdoing was worse. But the interesting thing is T.I. was the main one who was accused of cheating during their relationship. So this was really the first time that Tiny has been put in the public hot seat as T.I. hinted of more infidelities as well.

Things even got physical between Mayweather and T.I. a couple of years ago when the two ran into one another in Las Vegas. Mayweather, who is reportedly banned from fighting considering he’s a professional, instead used his entourage to get back at T.I. who was said to have two black eyes after the melee.

TI And Tiny 2017: Rapper's Wife Accuses Him Of Cheating In Final 'The Family Hustle' Episode 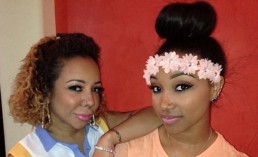