T.I and Tiny are making headlines after news of their divorce went more than public to say the least. But as they prepare to head for divorce court, there is speculation that they are expecting yet another child.

Pregnancy rumors for Tiny have sparked at what could be considered the most awkward time. The finale of her and her husband, T.I.'s reality show T.I. & Tiny: The Family Hustle, showed that they are both at peace with going their separate ways and divorcing. Still, that didn't stop rumors from swirling that the two are expecting what would be their eighth child, according to Hollywood Life Monday.

"T.I. just can't quit Tiny," one insider said amid an alleged spotting of Tiny with a baby bump Monday. "He's always creeping on her social media."

Still, being "smitten" with his wife of seven years wasn't enough to stop the two from having a huge blowup in the public. T.I. had been seen with and is now alleged dating a woman named Bernice Burgos, while T.I. pointed out Tiny's alleged transgressions and moments of temptation with popular boxer, Floyd Mayweather.

"She is torn because after everything she has been through with T.I., deep in her heart, she still doesn't want him to leave. But at the same time she knows she can's tay in a marriage if he has no loyalty or integrity."

T.I. and Tiny have yet to confirm any news of a new baby on board. It comes about a year after the rapper and the singer welcomed their seventh child, Heiress Harris together.
The family is often looked at as an example of a blended family. Tiny and her daughter, Zonnique, along with T.I.'s children Deyjah, Domani, and Messiah lived in one household together with the children the two have together, King, Major, and now Heiress. 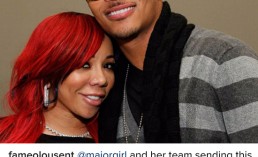 T.I. And Tiny 2016: Divorce Rumors Continue For Couple After They Reportedly Tried To Do Damage Control [VIDEO]