Jenelle Evans and David Eason said "I do" in September and on Monday night, fans of the reality star and mother of three watched the event play out on Teen Mom 2.

Although Evans was joined by her three kids, 8-year-old Jace, 3-year-old Kaiser, and 9-month-old Ensley, during the ceremony, there was one person noticeably missing from the special occasion and that person was Evans' mom, Barbara.

“I wish I could have a mom there,” Evans said during the episode, according to a report by Us Weekly magazine on Nov. 6.

On the show, Barbara appeared to be extremely upset about her daughter's wedding snub on her big day but refused to reach out and attempt to make amends with her daughter's now-husband, Eason, who has continued to fight with her throughout his relationship with the Teen Mom 2 star.

“David has alienated her from me,” Barbara said. “She chose David over her own family.”

Evans' father was also not included in the event.

In August, as she and Eason attended the 2017 MTV Video Music Awards, Evans spoke of her mother's reaction to her wedding snub and revealed why she was unwilling to have her mother at the event.

“She’s very upset,” Evans told Us Weekly. “I know she is and she … makes side comments here and there saying, ‘Well, you’re not inviting me to your wedding, so I don’t even want to talk about it.’ And I’m like, ‘I’m not trying to hurt your feelings, I’m just telling you this is what I need to do to get ready’ … I can’t forgive someone that’s just not going to give me back my son, so, and it’s still going on. It hasn’t been resolved. And if I had custody of him now maybe I would have invited her, but I’m not at the moment.”

In addition to her three children, Evans is also acting as stepmom to Eason's two children from his previous relationships, including daughter Maryssa and son Kaden.

To see more of Jenelle Evans and her family, including her husband and their kids, don't miss new episodes of Teen Mom 2 season eight on Monday nights at 9 p.m. on MTV. 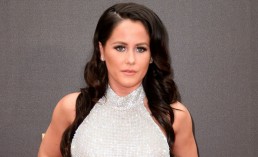