Kevin Spacey has been replaced by Christopher Plummer as industrialist J. Paul Getty in Ridley Scott's upcoming film, All the Money in the World.

Scott and production company Imperative Entertainment took the bold and expensive decision to recast Spacey in the film, which has already been shot and is slated to hit theaters next month.

The scenes with Spacey will be re-shot with the Oscar-winner but the film is still aiming for its scheduled release date of Dec. 22. Spacey scenes were shot over a total of eight days and a majority of them featured just him. Mark Wahlberg and Michelle Williams, who also star in the film, are also expected to re-shoot some scenes.

The movie was initially set to have its world premiere on the closing night of AFI Fest next week but was pulled from that slot a few days ago.

Industry sources claim that if anyone can pull off re-shoots and still complete the film in time to make the holiday release date, it's Scott. The filmmaker was previously forced to undergo re-shoots for the Oscar-winning film, Gladiator, following the death of actor Oliver Reed.

The move comes days after several men came forward with accusations of sexual harassment and misconduct against Spacey in the wake of actor Anthony Rapp's interview with Buzzfeed, in which he alleged that the House of Cards actor made sexual advances towards him when he was 14 years old.

Shortly after Rapp's allegations came to light, Spacey issued a public apology to the Star Trek: Discovery actor and also came out as gay in his statement.

The decision to replace Spacey comes a week after Netflix officially severed ties with the 58-year-old actor and announced that if it goes ahead with its political thriller, House of Cards, it will be without him. The streaming service also canceled the release of his film, Gore, which was already in post-production.

All the Money in the World follows the true-life story of the infamous 1973 kidnapping of Getty's 16-year-old grandson John Paul Getty III by an organized crime group but the oil tycoon's reluctance to pay the $17 million ransom forces his daughter, Gail (Williams), to take matter into her own hands and team up with Getty's business manager and former CIA operative Fletcher Chase (Wahlberg) for her son's return and convince Getty before its too late.

Check out the trailer (with Spacey) of All the Money in the World below: 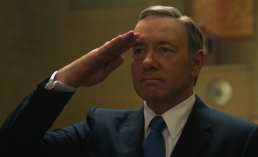