Mila Kunis and Ashton Kutcher walked the red carpet of the 2018 Breakthrough Prize Awards for the first time since appearing on That '70s Show together.

The Hollywood couple really seemed to be enjoying each other's company as they stepped out together for a rare red carpet appearance at the Breakthrough Prize Awards at the NASA Ames Research Center in Mountain View, California, on Sunday, Dec. 3.

While Kutcher, 39, looked dapper in a black tuxedo with a matching bowtie, Kunis, 34, made heads turn in a full floral skirt combined with a sheer black corset. The couple looked very much in love as they held each other's hands while walking the red carpet of the event.

While the pair posed for shutterbugs on the red carpet, they packed on the PDA as Kutcher lovingly put his arm around his wife and whispered something into her ear that made her giggle.

Although Kunis and Kutcher have been married since 2015, the 2018 Breakthrough Prize Awards marks their first red carpet appearance together as a couple since they starred together on the sitcom, That '70s Show.

Kutcher and Kunis played the role of on-again, off-again couple Michael Kelso and Jackie Burkhart on the show, which ran between 1998 and 2006.

The couple attended the event, dubbed as the "Oscars of Science," to present the Breakthrough Prize in Life Sciences to Kim Nasmyth, an English geneticist and professor of biochemistry at the University of Oxford. He was honored with the prize for his work on the segregation of chromosomes during cell division.

The event, which honors the top achievements in the field of physics, life sciences, and mathematics, was star-studded, with Morgan Freeman as the host and a live performance from rapper Wiz Khalifa.

Kerry Washington, Lily Collins, and Mayim Bialik were some of the other celebrities in attendance on Sunday night.

In a recent interview with ET, the Bad Moms actress talked about how her and Kutcher's priorities have changed after becoming parents.

The couple has two children together; a three-year-old daughter Wyatt Isabelle and one-year-old son named Dmitri Portwood, whom they welcomed last December.

"I can write you a book on kid-friendly activities anywhere in the world," Kunis said. "Because that's what we do. We used to be like, 'What's the coolest club?' and [now] I'm like, 'Let me tell you about the zoo in Atlanta and the bouncy house.' There's not one kid activity that I haven't done yet with my child!" 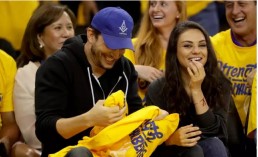 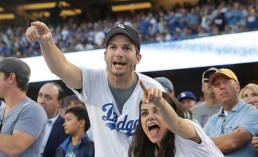 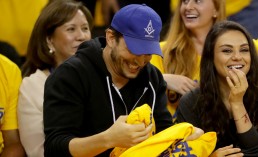