Amber Portwood and Andrew Glennon are preparing to welcome a baby boy together later this year, and recently, the Teen Mom OG star shared their son's name with her fans and followers on Twitter.

After the longtime reality star and mother of eight-year-old Leah received a message from her brother, Shawn Portwood, on Twitter, telling her that he was making a gift for her new baby, Portwood disclosed their chosen name.

"Awe Bubby I can't wait!! I'm sure little James will love it!" Portwood wrote on Jan. 2.

Portwood and Glennon confirmed their baby news at the end of last year and revealed they are expecting a son weeks later. As fans of Teen Mom OG well know, Portwood began dating Glennon a very short time after splitting from her ex-fiancé, Matt Baier, who has since moved on with new wife, Jennifer Conlon.

Portwood and Baier endured several dramatic moments during the sixth season of Teen Mom OG, including an awkward moment that featured Baier attempting to elope with the reality star. Then at the end of season 6, they called off their romance after Baier failed to pass a lie detector test in which he was asked about an alleged encounter with another woman.

After wrapping production on Teen Mom OG season 6, Portwood and Baier attempted to reconnect while filming the WEtv reality show Marriage Boot Camp: Reality Stars Family Edition. However, while taping the series, Portwood decided to end her relationship with Baier for good and ultimately struck up a relationship with Glennon, who was working on the set of the WEtv series.

Portwood and Glennon went public with their romance in August and also appeared on the red carpet at the 2017 MTV Video Music Awards that same month.

Speaking of her pregnancy during an interview with Us Weekly in November, Portwood admitted that she was a bit scared when she first learned she was pregnant with her second child just months into her relationship with Glennon.

“When I first found out, I was a little scared,” she explained. “I just kind of sat down and thought about it and realized that it was a big step in my life and it was a good thing actually, and I was really happy within 30 minutes.”

“After the initial shock, it was nothing but happy thoughts and just enjoying my time with my boyfriend,” she continued. “We’re both very happy.”

To see more of Amber Portwood, Andrew Glennon, and their co-stars, including Catelynn Lowell, Maci Bookout, and Farrah Abraham, tune in to new episodes of Teen Mom OG season 7 on Monday nights at 9 p.m. on MTV. 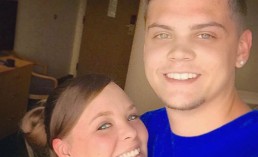 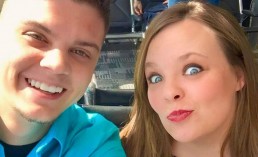 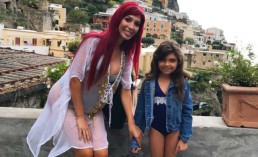