Ellen DeGeneres opened up about how the tragic death of her ex-girlfriend helped her career as a stand-up comedian during Tuesday's interview with Dax Shepard.

DeGeneres candidly recalled her first TV stint as a stand-up comedian in her interview on the Armchair Expert With Dax Shepard podcast. The host revealed how the death of her former girlfriend inspired her first-ever skit, "Phone Call to God."

At the time, DeGeneres was not doing comedy. Instead, she was a 20-year-old waitress living at a tiny basement apartment in New Orleans. She was struggling to make ends meet. She recalled that she moved to the apartment following the death of her girlfriend since she could not afford the shared apartment anymore.

"I was living with her, and when she was killed, I couldn't afford to live where we were living together. So, I moved into this basement apartment and I was sleeping on a mattress on a floor and it was infested with fleas. And I used to write all the time, I wrote poetry and songs and stuff, and I thought, 'Why is this beautiful 21-year-old girl just gone and fleas are here?'" DeGeneres recalled.

"And I just thought it would be amazing if we could pick up the phone and call up God and ask questions and actually get an answer," the host added.

Inspired, she began writing ideas down, coming up with funny tidbits until the whole skit "just unfolded." She read her piece and realized that it was hilarious. She then decided to perform it on Johnny Carson and vowed to be the "first woman in the history of the show to be called over to sit down."

DeGeneres' prediction came true when she performed "Phone Call to God" on The Tonight Show Starring Johnny Carson on Nov. 28, 1986. She became the first female comedian to be invited to sit down on Carson's couch. It was a career-defining experience for the 10-time Emmy winner, who quit her waitressing job to become a successful stand-up comedian.

The host of The Ellen DeGeneres Show previously opened up about the car accident that killed her ex-girlfriend in an interview on Oprah Winfrey's Master Class in 2015. It happened after she watched her brother's band perform and on the way home she saw a car split in half. It was only the next morning that she learned that her ex-girlfriend was in the car.

Prior to the accident, the talk show host said she and her ex-girlfriend broke up after a huge fight and she left their apartment. Her girlfriend reached out to her because she wanted her to come back home but she was being dismissive of her. DeGeneres felt guilty over her death but the tragedy also shifted her focus in life. 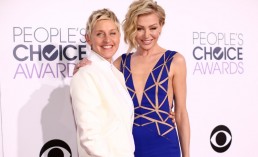