Easter is yet to come, but a bunny, a sexy and beautiful at that, in the name of Miley Cyrus, has already made her presence felt.

The singer made sure she is prepared for this year's Easter holiday as she fills her Instagram with photos of iridescent in hue. Take note, this wasn't just selfies, as it was obviously a photoshoot, so clearly Cyrus had upped her holiday game this year.

It was actually a Vogue shoot done by Vijat Mohindra, and Vogue revealed that this was part of the "Wrecking Ball" singer's efforts to celebrate each holiday with a bang.

"It started with Valentine's Day on a shoot with Ellen von Unwerth, went into St. Paddy's Day partying with some friends, and now it's Easter," Cyrus said.

There are currently 15 photos centering on Easter on her feed, and her display picture was also changed to one of the photos. Most people are busy painting eggs and then hiding them in the garden for children to find, and Cyrus clearly gave another take on this.

Most of the photos don't contain captions, and these don't really need additional explanation. Arguably one of the best of the set is the one where Cyrus stands inside a basket with colorful eggs while she is holding a carrot, which was really tastefully made. Another one shows the former Disney child star, clad with bunny ears, sitting with a white cat on her lap, and on the grass was a rabbit mascot's head.

There were also those that emitted the bolder and sexier side of Cyrus, such as the one where she was wearing a pink one-piece while a bunny seems ready to spank her. Another one shows the 25-year-old posing with a small pink bike while she dons a cleavage-revealing dress.

Vogue shared that Cyrus styled herself for the shoot with the help of Bradley Kenneth McPeek. That said, The Last Song actress truly expressed herself in the photos. It gives light as well on how she could further venture into fashion, and her vast, drastic fashion changes all throughout the years prove she is one who could experiment on pieces without giving attention to naysayers.

The photos were shared to her almost 75 million followers, and most were praising her, saying she was beautiful. Liam Hemsworth, her hunk boyfriend, was nowhere to be seen in the photos. One fan even asked if the one on the bunny suit was the Australian actor. 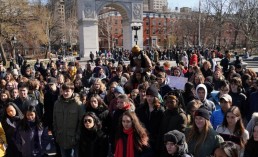 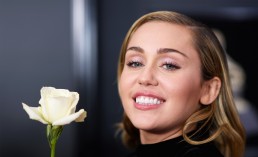 Miley Cyrus Takes Selfie With 'Lizzie McGuire Movie' Star Yani Gellman, And It's What Dreams Are Made Of