Uh-oh! Is there trouble in paradise for Khloe Kardashian and Tristan Thompson?

The 27-year-old NBA star spent the weekend in New York City prior to the Cleveland Cavaliers basketball game against the New York Knicks on Monday, April 9.

Is Tristan Cheating On Khloe?

Before the game, Thompson and his teammates reportedly enjoyed a night-out at a rooftop bar and lounge. It looks like the athlete enjoyed his night a little too much after a video obtained by the Daily Mail showed Thompson getting "up close and personal" with a woman that was definitely not his pregnant girlfriend, Khloe Kardashian.

The media outlet further reported that the Cleveland Cavaliers player allegedly leaned in for a kiss while he spoke to the mysterious woman.

The woman who filmed the incident claimed that she was within feet of Thompson, and everyone knew it was him.

"I was there and he was on the table right next to us with a group of friends and some girl who he was obviously making out with all night.... They were holding each other and it was so obvious," the woman said.

If Thompson was indeed making out with the unknown brunette woman, it would come as a shock as his girlfriend could give birth to their first child together at any moment. The Keeping Up With the Kardashians star is currently nine months pregnant and will welcome a baby girl with Thompson. However, this will be Thompson's second child as he already has a son with his ex-girlfriend, Jordan Craig.

After months of speculation, Kardashian officially confirmed her pregnancy via Instagram in December 2017. The 33-year-old denim designer shared a photo of her and Thompson's hands around her growing belly.

"My greatest dream realized! We are having a baby! I had been waiting and wondering but God had a plan all along. He knew what He was doing. I simply had to trust in Him and be patient," the reality star wrote.

Ever since announcing that she and Thompson were expecting, the Revenge Body host has continued to share their sweet moments together. Recently, Kardashian posted several photos on her app from her maternity photo shoot that she did with Thompson. 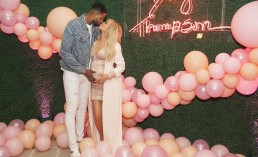 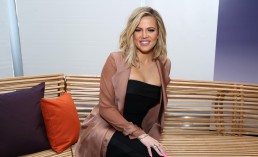 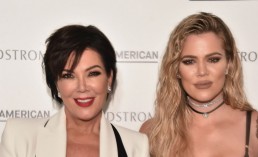