Shocking footage emerges, showing actor George Clooney's collision with a dark-colored Mercedes on the streets of Sardinia in Italy.

Based on the footage, Clooney is lucky to have survived the crash intact, without suffering any serious injuries. Italian newspaper Corriere Della Sera released the security camera footage on Tuesday, July 10.

According to local police, the car cut into the actor's lane, causing the terrifying accident. Clooney was driving at around 65 mph when the car entered his lane, according to reports from a source close to him.

The Ocean's Eleven star hit his head off the car's windshield, cracking the glass before he flew 10 feet into the air.

"It's good to be alive," said Clooney in relation to the accident.

Amal Clooney, his wife and a human rights attorney, rushed to her hubby's side following the incident. The actor was admitted to the hospital with pain in his pelvis and bruises on his legs and arms. However, he was released after tests concluded that he was okay.

"He is recovering at his home and will be fine," confirmed his representative.

The actor is currently shooting the Hulu limited series Catch-22 on the island. He was traveling along a road when the incident occurred. He is expected to resume filming soon on the six-episode miniseries.

He and Amal, along with their one-year-old twins Alexander and Ella, have been enjoying their time at the picturesque seaside locale. Clooney's parents recently joined them on the island for a mini break.

Catch-22 is directed and executive-produced by Clooney. He stars in the upcoming series alongside Hugh Laurie and Kyle Chandler. The series was written by Luke Davies and David Michôd based on the seminal Joseph Heller novel.

Set in Italy during World War II, the story focuses on artful dodger John Yossarian (Christopher Abbott), a bombardier for the U.S. Air Force furious and the thousands of people who want to kill him.

Rather than fearing the enemy, Yossarian is annoyed that his bosses keep increasing the number of missions the men must complete in order to finish their service. Clooney plays a minor character, Scheisskopf, whose wife is having an affair with Yossarian. 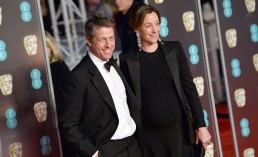 Hugh Grant Says ‘It’s Really Nice’ Being Married: ‘I Should Have Done It Before’ 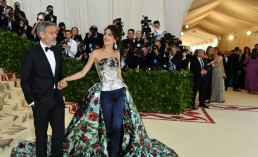 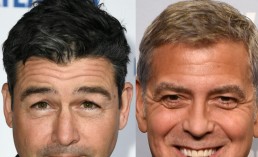