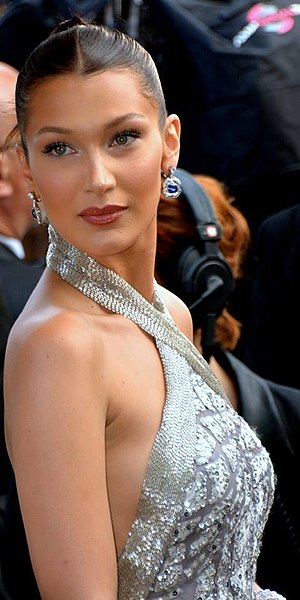 Supermodel Bella Hadid has been declared the most beautiful woman in the world. At least, this is what Greek mathematics Is confirming.

Scientists have made an analysis of some of the most beautiful women in the world using the Golden Ratio of Beauty Phi Standards. They have picked the image of Victoria's Secret model and claimed that her beauty comes closest to what can be considered perfect, reports say.

The Golden Ratio of Beauty Phi defines the standard of beauty according to the classic calculations of the Greek. Facial proportions are measured by going through the standards that Greek scholars used while they were trying to define what was beautiful using a mathematical formula.

Though the process may be far from how most would define beauty, the scientific equation that put Hadid on top has been a product of years of research. According to the measurements followed by the Golden Ratio, the face of the 23-year old model has reached a score of 94.35 percent perfection.

There is no denying how beautiful this supermodel is and now both math and science have confirmed it. She's got the most beautiful face in the world, leaving everyone else hopeful they could come next.

Using the same parameters of the Golden Ratio of Beauty Phi, pop diva and superstar herself, Beyonce, comes in second. She landed the second spot with a score of 92.44 percent close to perfection.

With a ratio score of 91.85 percent to perfection, Actress Amber Heard comes in third. And who could deny pop superstar Ariana Grande with her own award for beauty at 91.81 percent? Her beauty score definitely shows in her lovely face.

Dr. Julian De Silva was the one who conducted the measurements and determined the beauty scores of these women. He is a cosmetic surgeon in Harley Street in London.

He called Bella Hadid the beauty that is close to perfect because the measurements of her facial features. Specifically, her chin got the highest overall reading with a score of 99.7 percent. It is only 0.03 percent away from being perfect.

Everyone knows how perfect that chin is.

According to his findings, the women who made it to the list have a beauty that is comparable to the standard of beauty set by the Greeks. The measurement of the elements on their faces has put them on a spot. Now, they can claim of beauty based on what mathematical equations and scientific research means.

Earlier this week, Bella Hadid quelled  some rumors of her and ex-boyfriend the Weeknd getting back together. They were spotted together at her birthday party.

The Weeknd and Hadid called it quits a few months back. In their interviews after they confirmed their break-up, they quashed all rumors of possibly reuniting as lovers, saying that they are better off as friends. They also said they wouldn't be anything more than that as they move on from their relationship.