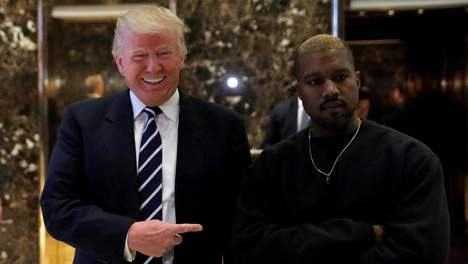 Kanye West is in the middle of a controversy once more, slamming Democrats with his "Jesus Is King" album launch.

Amid criticisms, the son of the president, Donald Trump Jr. shows support for the rapper praising Ye for his "fearless creativity." West is also described a pioneer for speaking on the truth on the war against American culture.

West previously launched an album that caused much ruckus. First and foremost because it was delayed over and over again. Ye was supposed to release an album last year, but this did not push through.

The rapper then started to tease an album launch by September.

Finally, the rapper pulled all strings and went sleep-deprived just to launch "Jesus Is King" for the Billboard 200 Chart, as Enstarz reported.

However, the album was blasted for feeling incomplete and unfinished. Apparently, it only have 11 songs, playing for mere 27 minutes.

Regardless, Donald Trump Jr. sends his support for the rapper. West is known to be a strong supporter of President Trump and the Republicans.

Trump Jr. calls out Leftists for silencing those who speak the truth - of which, he believes, West is a pioneer of.

Kanye West is cracking the culture code.@kanyewest’s new album #JesusIsKing is the epitome of fearless creativity and “dangerous, unapproved” ideas.

Leftists always try to silence those who are speaking truth. They’re waging a war on our family and culture.

On Cracking the Code

The 42-year-old rapper has fearlessly made his political stance known to Democrats criticizing them of the African-American culture they made. While Ye is known for his jarring political statements, his interview for his album with Big Boy over the weekend carried with it some emotional sentiments.

Kanye confessed that he has turned his back on 'victimization mentality,' calling out voting based on skin color as 'mental slavery'. He even calls food stamps as the Leftists' way to brainwash African-Americans to get them to vote for Democrats, all while "lowering our votes."

Most interesting of the rapper's strong sentiments against the Democrats is for their encouragement of abortion among black people. Ye referred to the Plan B Emergency Contraception guised as a morning-after pill among black women, but has been found out to prevent pregnancy. "Thou shall not kill," he reminded Leftists.

However, when Big Boy asked him if he considered his support may be construed as endorsing racism, the rapper said no.

Ye blurts out, "the most racist thing a person can tell me is to choose something based on my race." - voting included.

Apparently, West has his eyes set on the presidential seat. He previously announced at the 2015 MTV Video Music Awards that he will run for president in 2020, Independent reported.

However, just like his album, Ye is also delaying his plans for running for the presidency, announcing yet again that it may not happen until 2024. He tells DJ Pharris in a radio interview that he will not try, but if he decides to run for presidency, then "it will be done. 100 percent, 2024," reveals West.