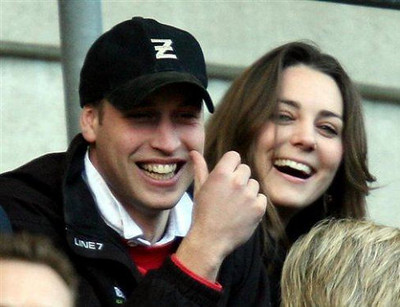 Eight years of marriage and three children later, the Duke and Duchess of Cambridge are still sharing sweet moments like these.

The day was a celebration for Shout, a text message service that seeks to support people with mental health struggles. It has been six months since the service launched.

The Duke of Cambridge was noticeably more attentive to the Duchess at the event. It would seem he is keen to look out for his wife.

William was caught several times touching Kate at the small of her back. It was a gentleman's gesture as the royal couple kept it low-key on PDA.

While they are not the type to hold hands in public or neither can you expect the Duchess to hold on to William's arm, they have their ways of staying connected to each other.

Quick gazes and sweet gestures reciprocated were signs that the Cambridges are a happy couple. Once, when William gently touched Kate's arm, she also reached over.

Those little gestures took precedence for the sweet moments they would share all day.

The couple was recently seen leaving the Troubadour White City Theatre in London. They just came from a celebratory event for Shout Crisis Volunteers.

After they bid farewell to the officers of Shout, William lightly touched Kate on the arm and they made their way down the steps.

As the couple headed to their car, Kate's left shoe nearly came off. The Duchess toppled over in her black block heels. Good thing Kate was able to get hold of the car for balance.

The Duke and Duchess shared a fleeting moment in their own romantic world. William reached out to touch Kate's back, making sure she was alright. They chuckled a little and kept their big smiles as they entered the car together.

Surely they laughed it off a little more inside the car before moving on to more serious matters from the event.

What's So Wrong With Royal PDA?

Myka Meier, the royal etiquette expert behind Beaumont Etiquette reveals that no formal rules are set preventing royal PDA. However, royals should exercise due discretion and professionalism when they are on royal duty.

While not once was Queen Elizabeth and Prince Philip photographed or seen showing affection in public, it doesn't mean it's a rule not to.

Rather, they may have carried the stoic values of their generation, reveals royal biographer Gyles Brandreth.