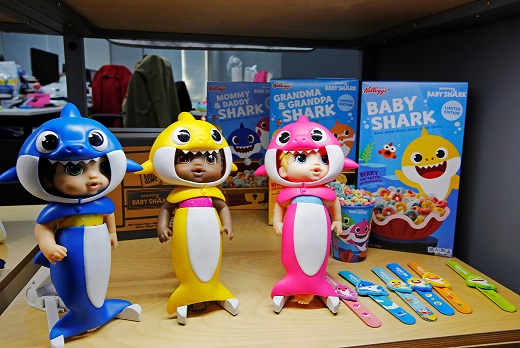 Who has not sang along with the viral jaws that spilled its popularity online? The past 12 months of 2019 has been all about the sharks and their song.

"Baby Shark" has become a viral song among kids and kids at heart. In fact, it broke records on Youtube and got into the Billboard's top 40 songs.

It was practically used by everyone who needed an "upper" even in unusual places that would play such song. The "Baby Shark" got into the playlist of late-night, major baseball league, and a number of television series.

However, the makers of "Baby Shark" are not stopping now. They are planning another catchy kid-centric tune that will take parties to a whole new level.

The goal is for the new songs to haunt everyone even in their wildest dreams.

SmartStudy, the company behind the famous family of singing sharks, are looking into another way of swaying their audience.

The upbeat anthem of "doo doo doo doo doo doo" apparently did not win the hearts of audiences in China. And so, the South Korea-based company is planning to add a new cast of characters. This time, they want to cast dinosaurs into the kiddie equation.

Ryan Lee of SmartStudy told Reuters that they did not expect the popularity that the sharks reached. However, the market in China that remains untapped until now inspired the makers of the hit song to be more creative in their new endeavor.

Lee thinks that there are children around the world who love dinosaurs, but there is no brand that is directly attached to it.

"Baby Shark" is the fifth most viewed video on Youtube, which paved the way for its success.

When asked why they want to tap the China market when the country does not have access to Youtube, Lee hinted that they just did not want the 'shark' song to be the brand's one-hit-wonder. He added that there is a unique possibility that everyone will enjoy a dinosaur song with the vibe of the Baby Sharks.

"Baby Shark" has become a multi-platform phenomenon. It has conquered the online world, and the news of its addition to the growing list of Nickelodeon shows promises to make the television experience even more fun.

SmartStudy, with its partnership with Viacom/Nickelodeon, will be producing an animated series around Baby Shark. However, they vowed to create a whole world around its characters.

In their press release, Nickelodeon expressed their excitement as they welcome a new addition to their family. Their team is working hard to put out Baby Shark products in multiple categories out in the market as well.

The content team, on the other hand, is developing a terrific, all-original animated series that will bring the Baby Shark experience into new heights.

The Baby Shark Live is already on stage and a movie is in the works, too. There is no stopping the team behind the hit "Baby Shark."