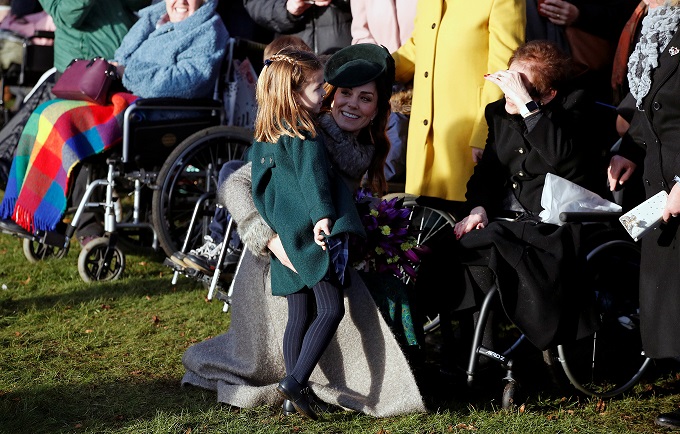 Kate Middleton is always a picture of grace and poise whenever she is seen out in public. Nonetheless, this year's Christmas Walk is a bit different.

The royals have learned a lot of hacks, especially when it involves them being out in the public. The Duchess of Cambridge is one of the members of the royal family that always seems to look her best when she is out and about doing her royal duties.

However, in this year's Christmas walk though unnoticeable, Kate suffered a wardrobe malfunction. The coat she was wearing that morning has been a huge problem for her.

Kate Middleton is always picture perfect. Since she joined the royal family, the simple woman became sophisticated and regal in her outfit. In fact, she has sewn weights on the hem of her skirts to keep it from flying and keep what needs to be hidden.

Unfortunately, Kate suffered from a wardrobe mishap which made her fully regret the outfit of her choice.

Kate was wearing a grey coat by Catherine Walker for the annual Christmas walk with Queen Elizabeth II and the other members of the royal family. They came out of the church and greet the people on Christmas morning.

According to the report released by Metro though, Kate revealed that she regrets wearing the grey coat because it made her feel hot inside. The coat was perfect for "winter-like" weather conditions. But when the sun came out on Christmas morning, Kate felt like she was overheating from inside because the coat was just too thick.

Kate said that she suffered from the classic "winter coat conundrum." It feels good when you first put it on because it makes you feel warm and toasty inside. However, when the sun decides to shine, that is when people realize that they have dressed in layers way too much for their own good.

The Duchess of Cambridge was feeling too hot with the coat she was wearing and told Rachel Anvil that she should not have worn it that morning.

The walk to Church in Sandringham was the debut for Prince George and Princess Charlotte. It was the first time for the two young members of the royal family to join the walk. The annual Christmas walk has been a tradition led by Queen Elizabeth II herself.

The entire royal family joined the church service then walked out to the people waiting for the meet and greet with the royals.

This year, Prince George and Princess Charlotte were old enough to wake up in time for the royal tradition. They were seen holding hands with their dear mother Kate Middleton and father Prince William. Notably absent during the Christmas morning walk was Prince Andrew and the royal couple Prince Harry and Meghan Markle.

Reports say that the Duke of York was asked not to join the royal family during the walk. After his much-talked-about involvement with Jeffrey Epstein and the scandal involving Virginia Roberts who claimed to have sexual relations with him, Prince Andrew has opted not to join the family this year in their holiday traditions.

The Duke and Duchess of Sussex, on the other hand, have opted to celebrate Christmas this year with Meghan Markle's mother in the U.S. It has been reported that the couple will be welcoming the new year in a mansion in Canada.

Apart from the fact that Kate was wearing the wrong coat, Christmas in Sandringham went off without a glitch. It was a perfect family celebration in the most royal way possible.

READ MORE: Kate Middleton as The Next Queen? Duchess of Cambridge Gets Rare Chance to Wear a Tiara