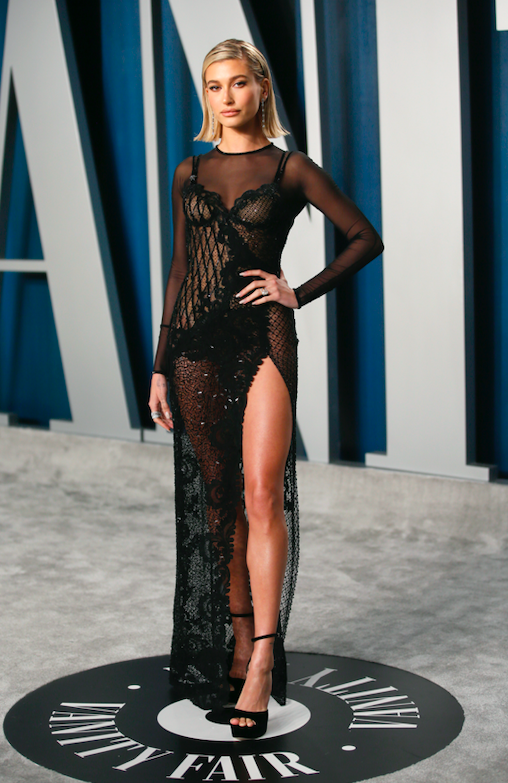 Alhough not all celebrities received an invite to the actual 92nd Academy Awards ceremony, most of Hollywood's A-list stars attended the after parties.

Vanity Fair hosted an iconic Oscars after party, with the likes of Kim Kardashian, Kylie Jenner and Jennifer Lopez all in attendance.  Apart from them, Hailey Baldwin also made an appearance.

The 23-year-old showed off her toned physique, thanks to her sheer black dress with glitter and lace that looks like lingerie.

The supermodel's makeup was simple, opting for a nude lipstick with bronze eyeshadow and well-groomed brows.

Hailey Bieber looked like a goddess. However, one thing was noticeably missing: where was her husband?

apparently, Justin Bieber did not think of joining her blonde bombshell wife at the party. Had he joined his wife at the event, it would have been their first time attending the Oscars as a couple (Justin and Hailey are rarely seen on the red carpet together).

The first and last time people saw them at the red carpet was at the premiere of Justin Bieber's YouTube documentary series "Seasons." The two posed in front of cameras in the red carpet and packed a ton of PDA and smiles for the camera.

Now, according to Justin's social media posts, he was at home during the night of the Oscars after party. He was on his couch and seemed to be in a reflective state, talking about his journey and where he is in life right now.

Speaking to his 127.2 million followers, Justin encouraged fans to go to YouTube and share stories of how their lives changed and how they are going to adapt to those changes.

"How is it going to help you grow? How are the changes going to grow from that?" Justin asked. He also wants the fans to tag him on Instagram and Twitter.

Biebs finished off his video by saying that "We're in this together," which was seen on his caption as well.

In another video, Justin revealed that he spent an hour watching the entries that were sent to him.

"There have been incredible stories that made me laugh, tear up, and made me feel like I'm not alone. And that's powerful," the "Yummy" singer said.

"I appreciate you guys doing the videos and sending me love, and I look forward to sharing this album with you," he added.

Justin believes that his new album will "resonate" with the fans and help them "in this season of change."

Later that night, TMZ spotted Bieber capping off his big weekend after his appearance at "Saturday Night Live" by renting out the entire Wollman Rink in Central Park. He was seen with friends playing pick-up hockey and wearing a white number 5 jersey.

Hailey's solo appearance comes after her Elle Magazine cover interview, where she revealed that the couple's first year together has its ups and downs. She also mentioned that her husband's Lyme disease diagnosis hurt them as a couple because people "from the outside was being super mean and judgmental."

But all in all, Justin Bieber and Hailey Baldwin are going to be together, "in sickness and in health."