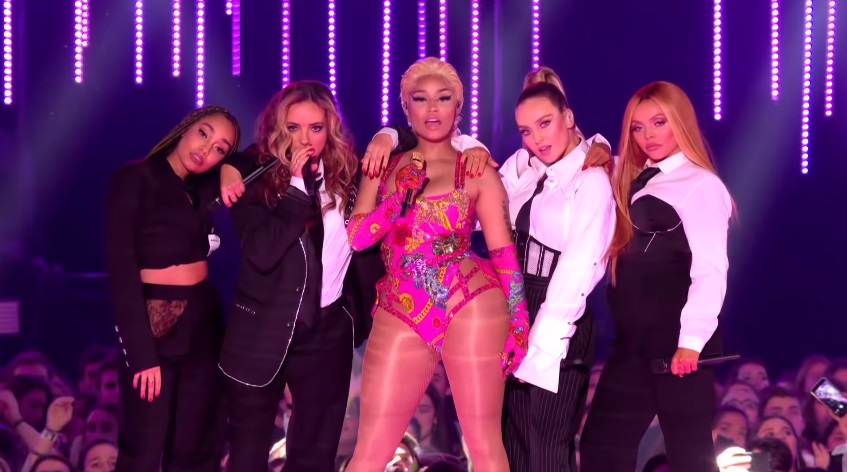 Is Nicki Minaj ready to become a mommy or is it just another tease for a new album?

The "Anaconda" hitmaker sparked pregnancy rumors after posting a video on Instagram where her husband, Kenneth Petty, was seen rubbing her stomach. Petty then blurted out and said "Trinidad with your dad."

In just two days after the video was shared, it now has over 6.4 million views.

It was then followed by an OOTD shot where the "Super Bass" singer was sporting a pink wig over a floral hat while wearing a decorative bikini top with a body-hugging cover-up.

Minaj then confirmed that they were in her hometown, the Republic of Trinidad, Carribean Island for an annual carnival festival.

Fans immediately responded and expressed their excitement for Nicki's baby number 1; however, others were a bit skeptical about it.

"Obviously she pregnant," a fan replied to her post. "No more rumors guys, she hasn't denied it. She be the first to slam somebody who be wrong. So she pregos it's obvious and she left this post here to let us know lol, we know."

Another fan congratulated the couple, saying: "Finally girl...congrats yall look so bomb together."

It is worth noting, however, that the 37-year-old rapper has not yet addressed the rumors.

Although the singer has not confirmed nor denied the baby rumors, Minaj previously announced that she will be retiring to start her own family.

Back then, the award-winning artist also thanked the fans for their undying love and support throughout the years.

After the fans, who called themselves "Barbies," freaked out, the singer-songwriter cleared that she was referring to her fifth album and not her exiting the music scene.

"When I posted that retirement tweet, I knew that I still had music that I already had recorded that was still going to come out," Minaj said. "So the retirement was kind of talking about my album, meaning like, 'Do I want to go back and record my fifth album?"

Blast From the Past

Minaj and Petty got married back in October 2019 after a year of dating.

According to the gossip site TMZ, Petty and Minaj were childhood sweethearts in Queens. In fact, Nicki described her husband as her first love.

Minaj is aware that her now-husband has a troubled past, one of which is that Petty is a registered sex offender and was convicted of attempted rape. He served his jail time in New York state prison.

Since she is madly in love with her beau and believes in second chances, the "Fendi" star confessed in her previous interview in Entertainment Tonight that she is eager to have a baby.

Nonetheless, Minaj is currently weighing her future in the business before starting a family.

"At first I was like, 'I want it now. I want it now.' And then I started thinking if I want it right, right now or if I want to wait another year because I have a couple of things that I have to do," Nicki said.