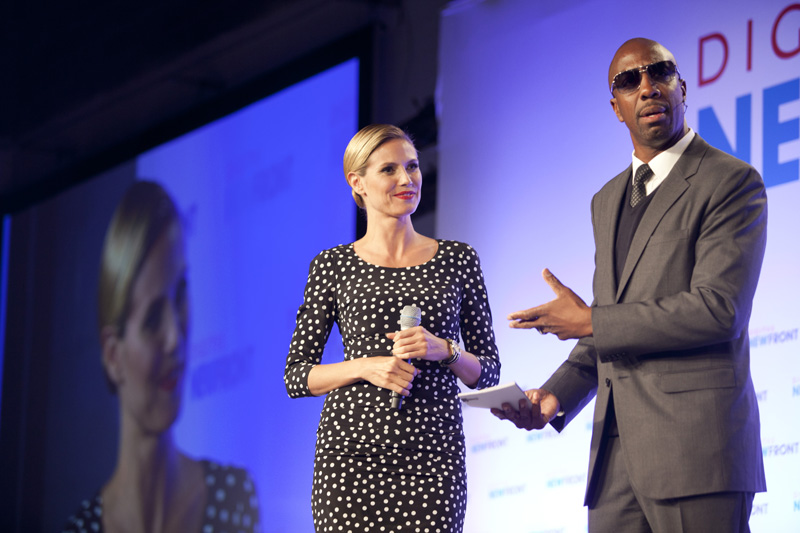 TV personality, fashion designer and model Heidi Klum may have to prepare to pass on the crown to a young and aspiring model.

In this week's issue of PEOPLE, the 46-year old star opened up about her family life, her career, and her show. The "Making The Cut" star along with her co-creator and co-host Tim Gunn revealed that one of her children expressed her interest to pursue a career in modeling and fashion.

"The only one so far who wants to step in my footsteps is my oldest daughter, Leni," Klum said. The host is also a mom to daughter Lou Sulola, 10, and sons Johan Riley Fyodor Taiwo, 13, and Henry Gunther Ademola Dash, 14. The proud mother shared that all her four children "have been coming to the set their whole life."

However, although Leni has expressed her desire to take after her mother, Heidi said her daughter still feels she has to "do her own thing" in life. The supportive mom shared that she never pushed her kids to do anything.

"She just started where she said, 'Okay move over. Let me take this over.'" Klum told PEOPLE about where Leni is at the moment.

However, Heidi Klum reminded her daughter of the truth about the fashion industry that she had to learn the hard way.

"It's definitely a ruthless business. It has also changed a lot over the years. It was very different when I started in 1992," Klum shared.

While she described her 15-year old daughter as her "own person," Klum added that Leni is showing a certain knack at her mother's career. The proud mom also said that among all her children, Leni seems to be the most interested in fashion.

"It's just that Leni seems to feel a natural pull towards fashion," Klum said. The model and fashion icon would gladly see her daughter succeed in the industry she practically grew up in.

Full Support All The Way

Klum's 66-year old friend and co-host Tim Gunn expressed his full support to all of Klum's children, whatever path they may choose to take on. He considered them his nieces and nephews as he and their mom go way back in their career and friendship.

"I hope they think of me as an uncle," he told in the same issue. "I have known them since they were infants and it's been wonderful seeing them grow up."

Gunn also expressed how truly proud he is of his good friend Heidi and how she raised her kids so well.

"What has been so reassuring for me in terms of the future of humanity is Heidi's super parenting and the fact that her kids are so beautifully behaved and polite and respectful, yet you don't feel as though they're shackled or chained," Gunn added.

He believes that all of Heidi's children have become themselves because of their mother.

"I was always pregnant when we were shooting (Project Runway) and I always had that big bell. You've witnessed all that including my breastfeeding," Klum revealed.

"What was remarkable was how quickly you weren't pregnant again," Gunn said, referring to how fast Klum got back into shape, to which Kulm responded she was "lucky" that her belly just "came and went."