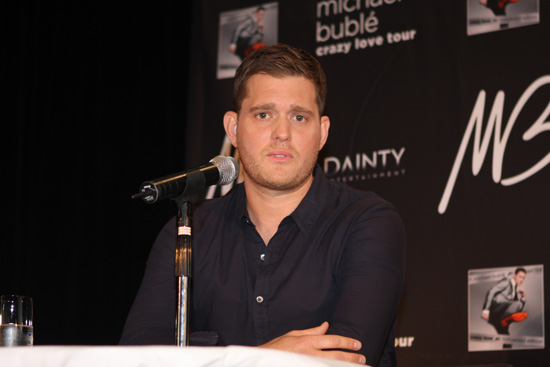 Michael Buble has been receiving death threats over allegations of domestic abuse. This was after a controversial video of him elbowing his wife came out.

Buble's wife came forward to speak of the death threats that her husband has been receiving.

The threats came after the singer was accused of physically harming his wife when he was seen elbowing her in an Instagram Live session.

In her recent interview on "Intrusos," an Argentinian talk show, Luisana Lopilato opened up about the trauma that she and her husband are experiencing at the moment. She revealed that Buble's life has been threatened and it has made both of them very uncomfortable.

"It made me afraid, and I still feel a little bit frightened," Lopilato admitted during the interview. According to the Daily Mail, the actress expressed her deep concern about the severity of these threats to her husband's life.

Lopilato furthered that although they have been receiving messages of support, she remains worried as the threats to her husband's life have become extremely aggressive.

"A number of people who sent me photos with weapons saying they were going to kill Mike when he reached Argentina," Lopilato said, according to report released by the Daily Mail.

From disturbing photos of knives to people expressing their desire to cut off all of Buble's fingers, the threats that the singer has been receiving has definitely gotten worse -- some involving bombs.

The Instagram Live Video that sparked the rumors of domestic violence may have expired after a day, but people remember what they saw. However, it is certainly too exaggerated to make threats to the singer's life for mere suspicion of abuse.

The Video That Started It All

Luisana Lopilato has always defended her husband Michael Buble amid all the allegations. In fact, when the issue of domestic violence and abuse first came out, she took it to her own social media accounta to deny all claims that were made.

She also denied all allegations thrown at him, emphasizing that they are in love and that she knows him better than anyone else.

"It's amazing how some human beings are!! While we go through this pandemic and live moments of lockdown, distress, fear, loneliness, uncertainties of all kinds! Every day we go out with my husband to do alive (sic) to bring them some joy, entertainment, longing, and we have to endure to hear and see what malicious people post who come out to talk anything and without knowing anything about our family," Lopilato wrote as a caption to the photo of her and Michael Buble.

These were originally written in Spanish but were later translated by Instagram in mid-April. Lopilato went on to say that she would always choose to be with her husband no matter what.

"I want you to know that I have no doubts who my husband is and I would choose him one and a thousand times more!!"

In conclusion, Lopilato said that what the world need right now is "love, hope, values, unity, and solidarity."