Beyonce is using her influence to demand justice for Breonna Taylor, an African American woman who was fatally shot by Louisville police officers last March.

The 38-year-old music icon penned a powerful open letter to Kentucky Attorney General Daniel Cameron to encourage him to bring criminal charges against the three officers who killed Taylor in her apartment.

Posted on her official website, Queen B called on to "commit to transparency in the investigation and prosecution of the officers' conduct" and to administer thorough investigation to the LMPD's response over the murder case.

"Three months have passed -- and Breonna Taylor's family still waits for justice," the "Run the World" singer began her letter. "With every death of a Black person at the hands of the police, there are two real tragedies: the death itself and the inaction and delays that follow it. This is your chance to end that pattern. Take swift and decisive action in charging the officers. The next months can not look like the last three."

The "Love on Top" hitmaker went on and pointed out that "LMPD's investigations have created more questions than answers," while specifying that all officers involved in Taylor's death are still employed.

"Don't let this case fall into the pattern of no action after a terrible tragedy," read the letter signed by Beyonce.

Following her moving gesture, the Grammy Award winner urged its million of fans to sign a petition to seek the justice that Breonna deserved. 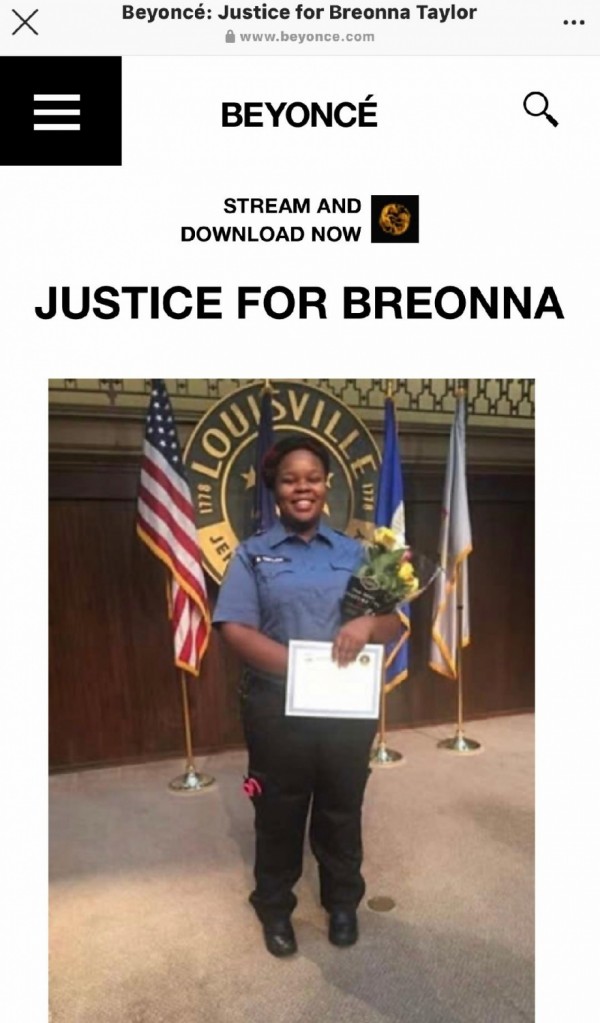 Multiple reports mentioned that there was an exchange of gunfire between Taylor's boyfriend Kenneth Walker and the police, believing that the Louisville officers were intruders.

With this, her family filed a wrongful death lawsuit, claiming that the three police -- identified as Sgt. Jon Mattingly, Myles Cosgrove and Brett Hankison -- failed to identify themselves.

Furthermore, it was said that the LMPD officers fired over 20 shots, causing Taylor to sustain eight gun wounds.

Following Beyonce's brave gesture, the Kentucky Attorney General's office acknowledged that they received the letter from the music icon.

"We are aware of the letter. As the letter makes requests related to the ongoing investigation involving the death of Ms. Breonna Taylor, we have no further comment," read the statement obtained by CNN.

Although Cosgrove, Mattingly, and Hankison have been placed on administrative reassignment, none of them were charged with a criminal case over Taylor's death.

On the other hand, Louisville Mayor Greg Fischer blasted the police department and mentioned that the unacceptable behavior "erodes public confidence" to the authorities.

"This is unacceptable. Full stop. It's issues like this that erode public confidence in @LMPD's ability to do its job, and that's why I've ordered an external top-to-bottom review of the department," Mayor Fischer posted on Twitter.

The Harder They Fall, a new American Western produced by rap artist Jay-Z, premiered in LA yesterday, and all the stars were dressed to impress.

Beyonce and Jay Z are a center of controversy recently as they were accused of flaunting too much wealth in their 'Tiffany & Co.' advertisement.

Barbra Streisand Insists Beyonce, NOT Lady Gaga Should Have Been Cast on 'A Star is Born'

Barbra Streisand Insists Beyonce, NOT Lady Gaga Should Have Been Csat on 'A Star is Born'

Knowles posted a photo showing Craig sitting in the stands, while surrounded by people who loved him.

The celebrities' New Orleans residence s now under investigation as authorities are led to believe the incident to be an arson attack.

Beyoncé's mom Tina Knowles has shut down rumors that the singer is suffering from social anxiety.

Seth Rogen Recalls Terrible Experience When He Tried to Meet Beyonce: 'I Was Hit So Hard'

Seth Rogen hilariously outed the details of how Beyonce's bodyguard humiliated him when he tried to meet the singer.