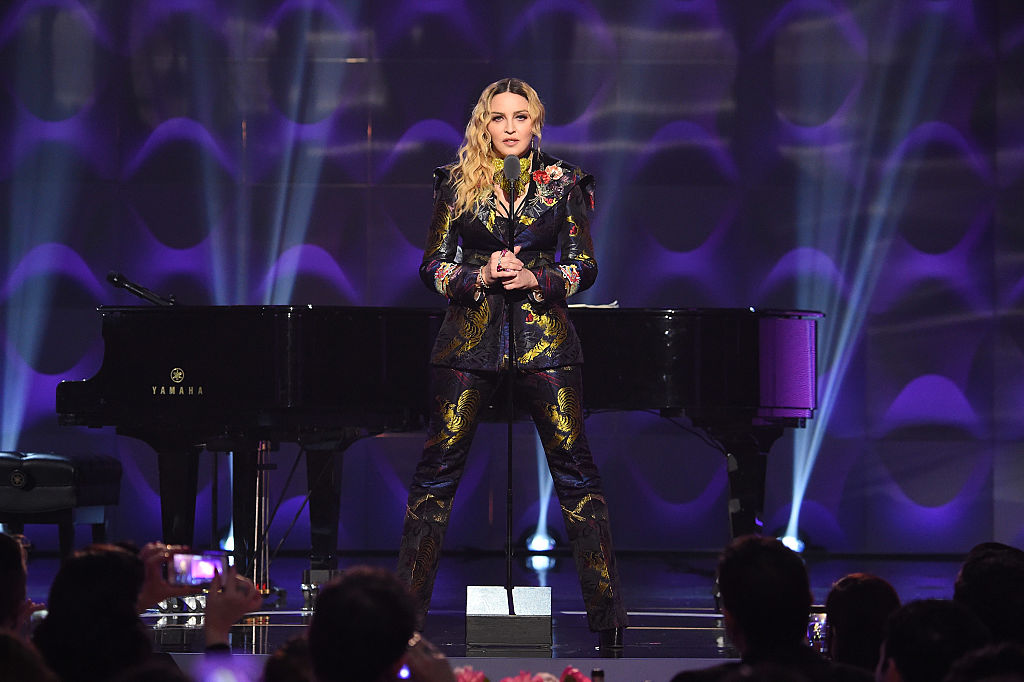 Madonna has once again proven that she is still the Queen of Pop, as she sizzles in a risque post.

The 61-year-old music icon wowed her 15.2 million Instagram fans with her nearly nude selfie photo, wearing nothing but a black sequined hat and black undies.

And just like a fine wine, Madonna looked exceptional with her toned abs, fit body and a voluptuous bosom which she covered with her arms.

The barefaced "Material Girl" singer can also be seen leaning on a crutch as she took the seductive snap in her bathroom.

Friends and fans were amazed by Madonna's daring IG post.

Aside from the two, the "Take a Bow" hatmaker's loyal supporter said Madonna still has "it."

"Anyone famous in Hollywood is dead & cloned or drinking adrenochrome to stay young till 100 yrs old. Queen of pop you still got it!" one fan commented.

"She is been dancing and performing forever..and it's no a surprise she keeps herself in shape and fit," another fan gushed.

Some also praised the Grammy Award winner for having a toned physique despite her age, but others called her an "attention seeker."

"Seriously? Are you that desperate for attention?" one IG user wrote, while another critic even accused Madonna of going under the knife and filling her face with too much botox.

"Love her but All the fillers in her cheek/temple areas really changed her eyes and the natural features of her face. She needs to relax with the fillers and allow her face to settle. She would look so much better if she did."

Furthermore, last May, it was reported that the Queen of Pop has undergone regenerative treatment in hopes to relieve the pain in her knee following her 2019 surgery.

The "Like a Prayer" songstress was photographed with her crutches while leaving the hospital.

Madonna had been dealing with her injury since March after falling off the chair during her Madame X tour performance at Le Grand Rex in Paris. She was forced to postpone her 14 shows due to health reasons, which has reportedly caused her "'indescribable pain."

"A friend who attended @Madonna Thursdays show told me that at the end of Vogue, she missed the chair and fell on the floor. A dancer had to help her on to the chair and then during the Polaroid part, she broke into tears and couldn't stop. #madonna #madamex #MadameXTour," a fan posted on Twitter."

Meanwhile, during the onset of global protests in the wake of the death of George Floyd, the "Beautiful Stranger" singer showed her support for the global movement Black Lives Matter and marched the streets of London using a cane.

READ MORE: Meghan Markle Is Destroying The Royal Family As We Know It -- Expert Claims