George and Amal Clooney were two of the 600 guests who attended the royal wedding of Prince Harry and Meghan Markle in 2018.

The pair were seen arriving among the crowds, including A-list stars Oprah Winfrey, David and Victoria Beckham, Tom Hardy, and Serena Williams. But it has been revealed that the Clooneys "hardly knew" the couple before their wedding.

Reporter Rachel Johnson wrote in Airmail, "there's a story doing the rounds that while Carolyn Batholomew, Diana's former flatmate, was waiting for the wedding service to start, she turned to the couple alongside her and asked how they knew Harry and Meghan."

The writer also alleged that the laundry list of high-profile celebrities "could not possibly be old and dear friends of the bridal couple."

At the royal wedding, George and Amal Clooney were given a "prime pew."

They sat between the late Princess Margaret's son Viscount Linley and the wife of John Warren and the Queen's bloodstock adviser, Lady Carolyn Warren.

Carolyn is Prince Harry's godmother. She is one of the three women the late Princess Diana shared a flat with before she met Prince Charles.

Carolyn sat in one of the most prestigious positions in the wedding ceremony, just opposite Prince William and Prince Charles. 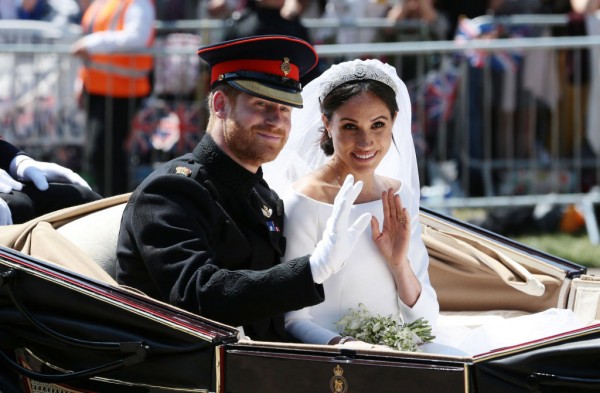 At the Sussexes' private reception party at Frogmore Cottage after the wedding, George and Amal Clooney were two of the 200 guests invited.

Numerous accounts even said that the "Ocean's 11" actor danced with the two Duchesses, Meghan and Kate Middleton.

But there are so many conflicting reports on how well Prince Harry and Meghan Markle knew the Hollywood power couple.

In the Duke and Duchess of Sussex's book "Finding Freedom," authors Omid Scobie and Carolyn Durand claimed that the Clooneys hosted the newly-weds on two occasions at their British home in Oxfordshire.

The biography also claimed that Archie's parents brought their dogs with them and that George and Amal loved to take the Sussexes out by the lake.

Per the book, "There, they had a secluded decked area and inside was a lounge decorated with traditional club wood paneling, heavy drapes, dark velvets, plush chairs, and a bar."

Scobie and Durand also wrote that the Clooneys invited Prince Harry and Meghan to join them at Lake Como just before their royal wedding. They reportedly flew out using George's private plane.

During their three-day visit, a source told the authors that the two ladies spend most of the time relaxing by the pool and playing with Amal's twins, while George and Prince Harry just looked at the actor's motorbike collection.

But that weekend, Princess Eugenie and her then-fiance Jack Brooksbank also reportedly joined them.

Meanwhile, George Clooney previously spoke in support of the Duchess of Sussex, claiming the constant attention Meghan Markle is experiencing is the same as how Princess Diana was treated.

He said in an interview, "She's a woman who is seven months pregnant, and she has been pursued and vilified and chased in the same way that Diana was, and it's history repeating itself."

George Clooney is already saying goodbye to becoming the next James Bond.

The 59-year-old actor spoke to Mark Wright on his Heart Evening Show to reveal why he isn't the right person for the role and even announced who should become the next 007.

George Clooney has some bold goals for the year 2021.

George Clooney was rushed to the hospital after drastically losing weight in preparation for his upcoming film.

Sure enough, George Clooney is like everyone else who isn't happy with how the year 2020 has been.

George Clooney has every reason to feel proud about his wife, Amal Clooney.

George Clooney was Hollywood's top bachelor - but now, he's a family man, all thanks to Amal Clooney.

Hollywood star George Clooney is finally hearing his wife's pleas. According to the National Enquirer's December 7, 2020 issue, Amal Clooney has banned her henpecked hubby from riding motorcycles, according to their sources.

George Clooney once hated Russell Crowe, and for a good reason.

After working with several A-listers in her entire career, Margot Robbie will not be making some movie magic with George Clooney anytime soon.