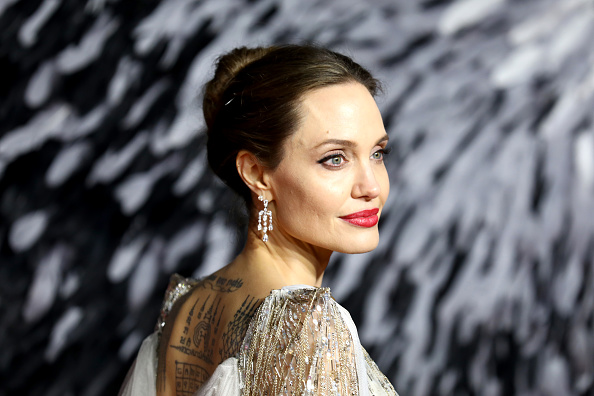 Is there something going on between Angelina Jolie and Mickey Rourke?

According to New Idea, the 45-year-old Hollywood A-lister is dipping her toe once again into the dating pool after her disastrous marriage to Brad Pitt collapsed a few years ago.

However, their source claimed that it's not about finding love, but more on getting her revenge on her former husband.

"Angelina is bitter, and she wants to hook-up with someone close to her ex-husband to put a little extra salt in the wound."

"Especially with how their custody battle just isn't going the way she wants," the source added.

Because some of the "Maleficent" star's best friends are said to be in relationships, Angelina Jolie is reportedly looking further. She believes that she has found the one - but for her scheming intents and purposes.

"She wants to hook-up with Brad's old pal Mickey Rourke. Even though he is not her type, she knows it will get Brad riled up."

If so, this wouldn't be the first time the "Tomb Raider" star and Rourke made Brad Pitt jealous.

Jolie and Rourke were spotted kissing each other at the 2009 Academy Awards, and Pitt reportedly hit the roof once he found out about it.

"Whenever they've run into each other at awards nights or parties, Mickey is super handsy with Angelina, and she shows no signs of rebuffing his moves."

The insider further said, "Angelina is hoping word will get out of something similar happening so she can recreate that fury."

"The thing about Ange is she knows exactly where to hurt Brad and will do anything to raise his temperature."

The truth behind Angelina Jolie and Mickey Rourke's kiss is that nothing's going on between them.

The photo published by New Idea is old, and their lips didn't even touch.

Even Gossip Cop is debunking the phony article.

Angelina Jolie is too busy being a mom to her kids and fighting Brad Pitt in court to gain 50-50 custody.

Since their divorce in 2016, they still haven't set the terms and are still in and out of court for their drama and issues.

But despite all of that, all they want is to keep their kids safe.

Mark Billingham, who worked for Pitt and Jolie a few years, told Now to Love that "Angie and Brad are anxious about who goes near their children."

Both actors have the same intent for their kids - just having their children's best interest in mind.

However, Jolie doesn't want to share the kids with Pitt.

Recently, she filed a petition to have the private judge overseeing their hearing to be removed due to conflict of interest.

The judge, John W. Ouderkirk, who also married the couple in their 2014 French wedding, failed to disclose that he had ongoing business and professional relationships with some of Pitt's legal team members.

But according to the Superior Court of California in Orange County, Ouderkirk will continue to be the judge on the case.