Two of the smoothest operators in music today - Anderson .Paak and Bruno Mars - have surprised the world by announcing their team-up back in February. And in an interview with RADIO.COM, they share stories on how Silk Sonic came to be.

Talking with Julia over drinks, Paak and Mars shared details from before Silk Sonic came to be, and what fans can expect from them moving forward in the latest RADIO.COM LIVE Check In. 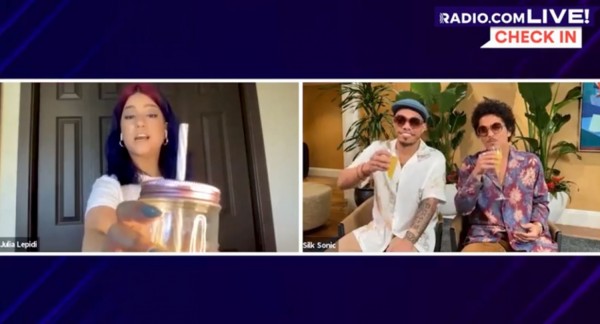 Coming Up With "Silk Sonic"

In between sips of mimosa, the two singer-songwriters revealed that it was Bootsy who suggested the name for the new dynamic duo of funk. Anderson said that they were choosing among names such as "RoboCop Funk," "World Gone Pair," and "Turkish Gold".

"Bootsy kind of came in and was like 'nah'," Anderson recalled.

When Julia asked the two about what made them come together, Bruno Mars answered the similarity in their backgrounds. Anderson has experiences being a live drummer and Mars singing live most of his life.

"And now being in the studio together we share that love for music and share the same inspirations," Mars added.

Additionally, Anderson Paak joked about finding out that they were in good vibes working together. Pointing to Bruno Mars, he quipped that he was threatened by his Silk Sonic partner. He shared how Bruno stressed that he has "a lot riding on this," requesting for his help. "I can't be the only one out here making this great music," Anderson Paak recalled the "24K Magic" singer telling him.

With regard to their debut single, "Leave the Door Open," Anderson Paak calls it a "statement piece," adding that there isn't anything else like this song right now. Recalling when they started together, they were looking for a song that "puts everything on the table" and wraps up the vibe and sound they are looking for.

Furthermore, the pair admits that they have been looking to bring back some live music elements in their tracks. While "Leave the Door Open" might be aiming for lofty goals, they shared that it represents their efforts and aspirations well, thanks to its musicality, modulations, and grooves.

"We're trying to sing our asses off and you know, we want people to feel it," Bruno Mars said.

Their debut single will be a part of their album, "An Evening With Silk Sonic," which was intended as an outlet for being unable to perform live in the year 2020 and up until now. "It's the setlist of doom... we can't really do shows right now but we put on a damn show in that studio," Anderson Paak joked. The event is set to be hosted by the one and only Bootsy Collins.

Tags: Bruno Mars anderson paak RADIO.com
© 2022 EnStars.com All rights reserved. Do not reproduce without permission.
Most Popular
You May Also Like

Cardi B Drops Out Of Bruno Mars Tour, Says She's 'Not Ready' To Return To Work Yet

Rapper Cardi B pulled out of her upcoming tour with Bruno Mars. The new mom admitted she wasn't ready to leave her daughter yet and was focusing on being a parent rather than rushing back to the stage.

New mom Cardi B admitted she's got more than enough help with her new baby for the moment. The rapper took to Instagram to thank her family for being there for her since the birth of her daughter, Kulture.

Cardi B assured her fans that she is perfectly capable of taking care of her career while being pregnant. The rapper admitted that she wants to keep the baby even at the height of her career.

Bruno Mars tried to play it coyly on his recent upload on Instagram, as he shared koala puns to his followers. He made sure he was in character, though at times it seemed that he was losing it.

And The Ladies Wept: Bruno Mars Thanks His Longtime Girlfriend During Grammys Sweep

Bruno Mars is off the market. He let everyone fans know that he's in a serious relationship while accepting one of the biggest awards for the night at the Grammy Awards Sunday.

Enstars is prepared to celebrate the 2018 Grammy Awards. In part two of our series, we predict the winners in several highly contested categories such as Album of the Year and Best New Artist in the R&B and Country categories.

The Recording Academy has revealed that recording artists Bruno Mars, Cardi B, and Kesha are expected to perform at the 2018 Grammy Awards. Other performers announced for the award show include Luis Fonsi, Daddy Yankee, Logic, and SZA.