Tiffany Haddish on Common Pursuing Her: "Because I'm the prize, boo"

Sassy as ever, comedian and artist Tiffany Hadish dropped by V-103 in Atlanta to talk about her relationship with rapper-activist Common and some of the bad habits she's trying to break. 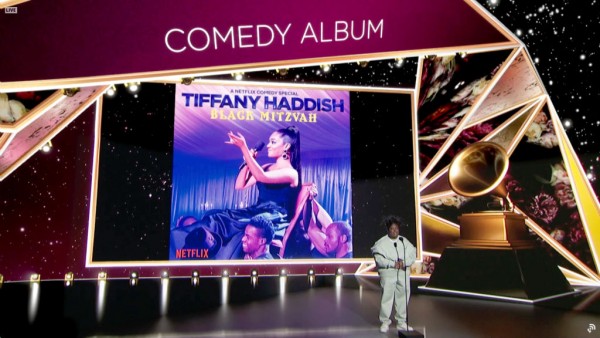 (Photo : (Photo by Rich Fury/Getty Images for The Recording Academy))
UNSPECIFIED: In this screengrab released on March 14, Chika announces Tiffany Haddish as winner of the Best Comedy Album for 'Black Mitzvah' onstage for the 63rd Annual GRAMMY Awards Premiere Ceremony broadcast on March 14, 2021.

Joining Big Tigger and the crew of The Big Tigger Morning Show on V-103, Haddish started the interview on a high note, saying how she's thankful for the opportunity and that she feels "successful." Following her warmly received hosting stint at The Ellen Show, Tiffany expressed interest in having her own talk show, adding that she's "always thought that."

Shortly after, Big Tigger steered the conversation toward her partner, Lonnie Rashid Lynn, or better known as Common. The two have been dating over a year, with the conversation revealing that the rapper and activist had to pursue her a couple of times before she agreed to enter the relationship.

When asked why, Haddish simply answered, ""Because I'm the prize, boo." She went on to explain how she feels that "men appreciate what they work for," adding that she just wants to be appreciated because "when you're appreciated, the value continues to rise."

Additionally, Tiffany Haddish joined Big Tigger in a fun and quick game of "10 Seconds or Less." The new host for "Kids Say The Darndest Things" expressed that some of the bad habits she has include "not going to bed on time, cussing, [and] smoking too much weed." But now that she's working with kids on the CBS show, she expressed desire to be more mindful of her language.

Tiffany Haddish also shared in her V-103 interview three things that she would tell her younger self given the opportunity. In a message that resonates with a lot of people, she told the 15-year-old Tiffany "not to get married till you're 30" and that "there will be hard times, but know that there is light at the end of our hard times molding you to be prepared for success because success is heavy," reminding her of the strength needed to carry things that come with it. Her third message to the younger, would-be icon Haddish is that "you don't have to hook up with every dude," sending everyone in the room laughing.

Born Tiffany Sara Cornilia Haddish, the Eritrean-American actress first gained mainstream attention for her appearance in the NBC show "The Carmichael Show." She soon made her break when she appeared in the 2017 comedy film, Girls Trip, together with Regina Hall, Jada Pinkett Smith, and Queen Latifah. Also in the same year, Haddish won a Primetime Emmy Award for her hosting stint at a Saturday Night Live episode and published her memoir titled "The Last Black Unicorn."

Aside from her Emmy Award, Haddish also has won a Grammy Award for Best Comedy Album for her comedy album Black Mitzvah, which also saw a 2019 Netflix special. This achievement makes her the second African-American woman after Whoopi Goldberg, who won the award for her "Direct from Broadway" album in 1986.

RELATED ARTICLE: Tiffany Haddish Swaps Her Jimmy Choos For Uggs At The 2018 Oscars

Tags: Common Tiffany Haddish
© 2021 EnStars.com All rights reserved. Do not reproduce without permission.
Most Popular
You May Also Like

Hint: the 'Anaconda' singer flaunts her booty in new movie.

Common For Green Lantern? Actor Could Be Considered When They Re-Cast Part

While a host of Justice League members have already been cast, a few that are getting their own movies are still without actors. Could one hero go a new direction after the failed first attempt?

Although it's still a few months away from kicking off its third season, AMC's Hell on Wheels continues to garner massive interest for its upcoming installment.

Zoe Saldana, has been selected to announce the nominees for the 2013 Spirit Awards. The "Avatar" actress will conduct the announcement alongside actress Anna Kendrick and rapper/actor Common on Nov. 27 at the W Hollywood in Los Angeles. Sean McManus and Josh Welsh, co-presidents of Film Independent that produces the awards had the following to say about their picks for the event: "Anna, Zoe, and Common have become an integral part of the Film Independent family and we are honored to have them join us for this big moment to announce and celebrate the best independent artists of the year," said McManus.