He's Not Real!!! 8 Pieces of Evidence That Undoubtedly Prove That Josh Groban Is A Figment of Your Imagination

Would you rather be famous for no reason or be very successful but surprisingly unknown?

Allow me to rephrase this question.

Would you rather be famous for no reason or be Josh Groban?

Josh Groban is my favorite celebrity. I have been saying this for years. I'm not saying he's my favorite actor or singer (although he is incredibly talented and has the voice of an angel.) I'm saying he's my favorite celebrity. Why, you ask? Because even with his comprehensive resume, his many television appearances, his starring roles on Broadway, the average person on the street still only kind of knows who he is. He has been in Crazy Ex-Girlfriend, Parks and Recreation, and The Office. He was Tony Award nominated for his performance in Natasha, Pierre, and The Great Comet of 1812. He has sold over 22.5 million albums in the United States. Still, if you asked your average American to pick Josh Groban out of a line up, most of them would not be able to. 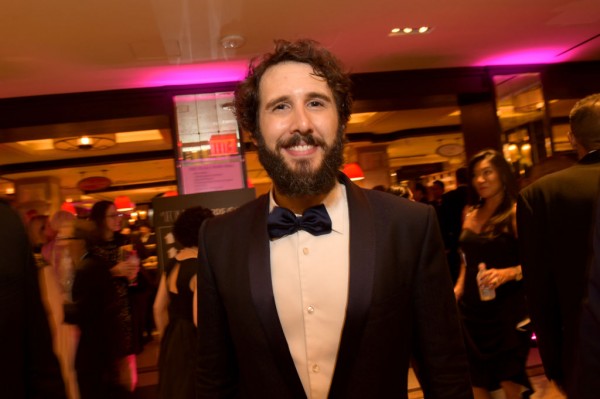 He's honestly living the dream: a productive career that still allows him to enjoy the anonymity of normal life. In the lottery of life, in my opinion, Josh Groban struck the jackpot. He has this whole life thing figured out. What a cool person...

Or so I originally thought.

Groban's situation is unique. A little too unique. How is it possible that someone so successful can paradoxically remain so unknown? How can he be famous enough to be called out by name on television shows, but then disappear from the public eye for months, even years at a time. Who are you, Josh Groban? Or even more pointedly, what are you?

I have begun to believe that Josh Groban is simply a figment of our collective imagination. While upon first glance he may appear to be a very talented, normal guy, doesn't he seem a little too normal to be real? No one is really that equally handsome and forgettable (no offense intended. Again, he is my favorite celebrity.) I appreciate those of you that have read this far. This theory goes deep, and I have done comprehensive research to back up my hypothesis.

Here are eight reasons I believe Josh Groban is just a figment of the imagination.

1. A Bit Removed from the Situation

You Raise Me Up was Groban's breakout hit. He grabbed the world's attention with his angelic voice and powerful music video. How about we look at this music video again. Is it just me, or does Josh Groban seem a bit...removed from the situation. In the beginning of the video, he is alone. As the video goes on, he lurks in the back area of the stage, seemingly unnoticed by the others. So unnoticed that maybe, just maybe, he's not really there. As in maybe he doesn't exist. I believe that this 2009 music video catalogs the moment Josh Groban was invented or, more specifically, collectively imagined. 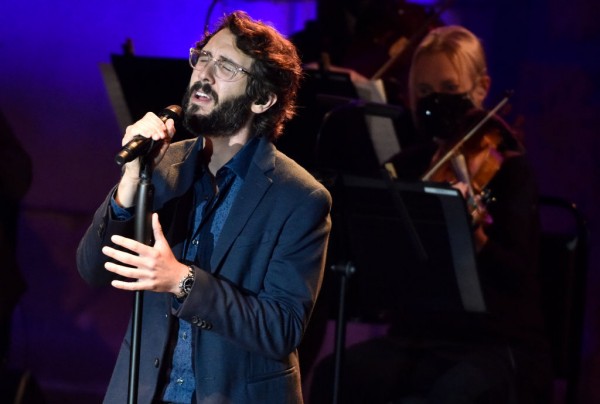 Josh Groban has been nominated for 4 Grammy Awards, but he has never won. Carly, most people go through life never having won a Grammy Award, this proves nothing. Josh Groban, however, is not your average individual. He is known, however loosely, for his perfect, angelic voice. He has, as was stated above, sold over 22.5 million albums in the United States alone. With his incontrovertible talent it is suspicious that he has never won a Grammy Award. Here is my theory: he was nominated to maintain the illusion that he exists, but he did not win because, obviously, you can't give a Grammy Award to an imaginary friend. It would have entirely ruined the illusion. 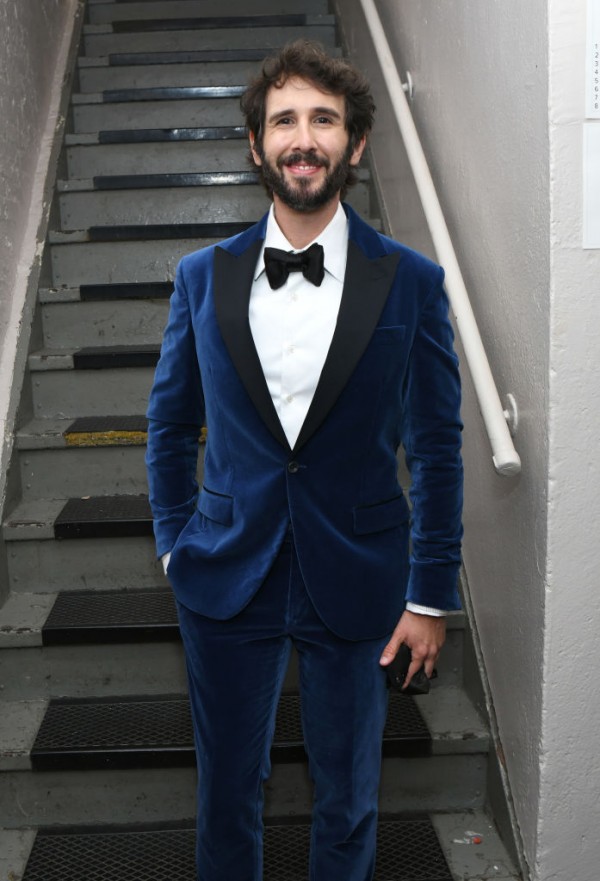 The only role he's ever held on Broadway was the lead in Natasha, Pierre, and the Great Comet. It is not unheard of for singers to walk into leading roles on stage, but, no matter how frequently it happens, it is enough to give theater kids across the country a moment of pause. What is more suspicious, however, is that Groban, after this one role, was nominated for a Tony Award. His angelic voice and his acting were SO GOOD on his FIRST STINT ON BROADWAY that he was nominated for the highest theatrical honor. He's so good it's almost...unreal. Much like the Grammys, he was only nominated. I'm sensing an interesting pattern here. Are you?

Try to fight me on this one, I dare you. In this Instagram video, what are the odds that the thing he talks about is something from a show? It's not something different. It's not something that would give us a peek into his personal life. Why? BECAUSE HE DOESN'T HAVE ONE BECAUSE HE IS NOT REAL. Whoever is pulling the strings of our communal imagination, creating a vibrant life and backstory for Groban so we continue to believe in him, doubled down too hard on his Broadway career, allowing sleuths such as myself to pick up on this plot hole in the delicate fabric of Josh Groban's unreal existence. (I recognize at the end of the video he shows us a signed photograph, but to that I say prove it.)

5. Josh Groban is the Joke

Josh Groban has been in many different television shows, but it seems as if in every show he is in, he is playing himself. He is the joke. For most real people, that is not the existence they lead. They have to do something. With Josh Groban, the fact he is Josh Groban and he is present in the moment is enough to make a joke. Because he is simply a figment of our imagination, he is able to be what we need him to be in the moment. If we need him to be a Tony Award nominee, he can be. If we need him to be the joke, he can be the joke. FURTHERMORE, in this specific clip from Crazy Ex-Girlfriend he is lurking in the background AGAIN. Hm...is it difficult to film imaginary people at the same time as real people?

In another of his television appearances in Parks and Recreation (where he is again lurking in the background), he does something very suspicious. While sitting at a sushi place where all of the sushi rolls are named after celebrities, Josh Groban is heard ordering, "the me sushi". First of all, why in everything that Josh Groban appears in does he have to in some way announce that he is Josh Groban? Sounds like someone is trying really hard to convince us that he exists. Secondly, it is interesting that in this clip he says "the me sushi" because, as we have established, we would not be able to pick Josh Groban out of a lineup. Therefore, by ordering in this vague way, Groban is attempting to solidify the facade that he is, in fact, a recognizable, real person. Nice try, Groban!

8. This Relationship is Clearly Fake

One of the easiest ways to make sure a celebrity is part of kitchen table conversations is to get them in an interesting relationship. It is not unheard of for Hollywood to have artists pretend to date each other for publicity. Such has been the case with Josh Groban. I mean, I try not to extrapolate. It's incredibly subtle, but, I don't know everyone...I think this relationship is clearly fake.

If you have reached this part of the post, I assume you are in agreement with me. However, you may still have one pressing question. Carly, why now? Why, if Josh Groban is not currently in a movie or show or on tour are you taking the time to write this article? I am writing this now because when you have been sitting on a hard hitting story such as this one for as long as I have been, you don't wait for a convenient time. You post. So I will be back, writing even more Josh Groban articles that amplify the fact that he cannot POSSIBLY be this perfect and real and still quasi-unknown. Don't you worry. I shall continue.

Again, none of this is anti-Josh Groban. Josh Groban is my favorite celebrity. He is supremely talented and seems very kind: like a friend. An imaginary friend.

Tags: Josh Groban crazy ex-girlfriend the office parks and recreation
© 2021 EnStars.com All rights reserved. Do not reproduce without permission.
Most Popular
You May Also Like

He's Not Real, But He's In Store! 8 Josh Groban Gifts You NEED to Buy The Josh Groban Believer in Your Life This Black Friday!

I have a list compiled here for you of eight perfect Josh Groban gifts you should grab this Black Friday.

THE WAIT IS OVER! Josh Groban is Coming BACK to Radio City Music Hall!! Don't Worry! He's Still Not Real!

The vocally perfect, best celebrity, figment of our collective societal imagination Josh Groban has officially announced that he is coming back to Radio City Music Hall!

Josh Groban's TikTok Presence Shows Us He is CONCLUSIVELY Not Real!!! Here are 8 Videos to Prove It!

Here are eight TikTok response videos made by Josh Groban that conclusively prove that Josh Groban is not real.

6 Times Josh Groban Suspiciously Played Himself... Basically Proving Our Point That He's Not A Real Person

One facet of Josh Groban's life and career points to him being entirely unreal. That is his television resume. Josh Groban has appeared in numerous different TV shows. What's weird about that? Well, in almost every TV show he has ever been a part of he plays the same character: himself.

While they certainly aren't the only surprising Hollywood romance, 2 Broke Girls actress Kat Dennings and singer Josh Groban are one of the newest to cause fans to scratch their heads.