When The Red Carpet Is Your Favorite Part Of Fame: These 8 Celebrities Went From Regular Star To Fashion Icon

There's no doubt that there are some celebrities who seem to exist to slay the red carpet. They may have begun as an actor, singer, athelete, you name it - but once they found a love for style, all bets were off.

From Jackie O. to A$AP Rocky, these 8 stars are absolutely killing it when it comes to fashion - some of them so much that it's become their full time job!

Rihanna is still out there making good music, but this isn't 2010 anymore, and she's got bigger fish to fry: Fish like Victoria's Secret, to be exact, because her inclusive intimates and cosmetics line Fenty Beauty is definitely beginning to displace their once-monopolistic status. (And it's about time.)

She also, of course, still brings it to the Red Carpet every time. Go RiRi!

Did it rub off on him because they're dating, or does style simply attract style? Either way, Rihanna's boyfriend and rapper A$AP Rocky is yet another star to whom others look for fashion direction. That's because this man runs the gamut - he can go from costumey to casual to red carpet-ready (sometimes with an action as simple as throwing off a blanket!)

One thing's for sure: Any room these two are in together is filled to the brim with fashion talent.

From winning American Idol - no, excuse me, almost winning and having his rightful title stolen from him just because of general 2009 homophobia, no I'm not still mad, why do you ask - to touring with Queen, it's no secret that Adam Lambert has had a plenty successful singing career. He has also, however, become known for absolutely slaying in fashion at every event he goes to - surprise surprise, the incredibly talented gay artist they chose to stand in for the great Freddie Mercury is also one of the world's best dressers. 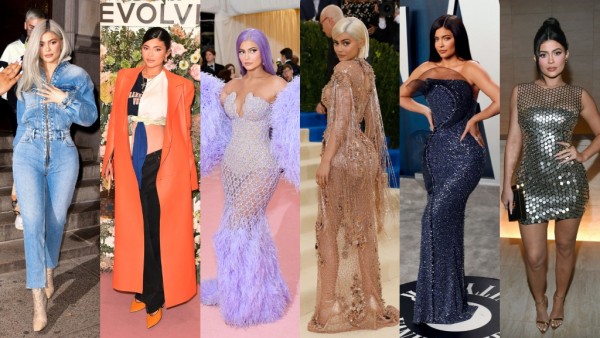 She may have started out as a pre-teen twin on a reality show, but Kylie Jenner quickly made a name for herself in the beauty world upon reaching adulthood.

Well, okay, half a name, people already knew Jenner, she just needed them to remember the KYLIE part - but seeing as her insanely successful cosmetics brand is called Kylie Cosmetics, it's clear that she did a pretty good job of that. She hopped into fashion in 2020 with her sister Kendall, dropping a line of clothes for Amazon where every item is $90 or less.

Billy Porter. Absolutely. SLAYS. What a fashion star. This man is one Oscar short of an EGOT, but when you google him the first thing that comes up are images of his various fashion triumphs - including lots of amazing dresses.

Porter was one of the first male celebrities to embrace non-binary fashion, and he does it with a flair that cannot be denied. And even when he isn't wearing a ballgown, he still creates looks to die for.

If there isn't some kind of slogan about Simping for Jessica Simpson, there absolutely should be, because this woman has been giving us quality looks for decades.

Simpson was originally a singer, but she's taken a hard pivot into fashion since then. Her website is all a platform for her clothing line at this point, making no mention of her music. Much like Rihanna, she took her singing talent and made it work for her - the hallmark of a great entrepreneur.

The widow of President John F. Kennedy isn't just known for being the First Lady; in fact, if anything, she was the closest thing the U.S. ever had to a royal family member. She was super classy and always well-spoken, and she was certainly associated with politics and public service, but for all intents and purposes, Jackie O. was just a private citizen after the death of her first husband.

It was one thing for her outfits to be the stuff of fashion iconry when she was in the White House, but for her to maintain that status up until her death decades after becoming a private citizen is an accomplishment in and of itself.

We all remember "Happy," but be honest, when you hear the name Pharrell Williams, you think of that big hat. We encourage you, though, to look down the next time you see a pic of him, because actually, the rest of his outfits are also usually on point. He runs the gamut from Chanel to casual streetwear when it comes to setting fashion standards, and he does it very well.

Pharrell loves clashing bright colors and using big, bold accents to make his looks talk - he'll frequently sport a social justice mantra to throw his support behind causes he cares about (he once wore a shirt that simply read "Women's Rights.") He also breaks gender norms like it's no big deal, which is really cool - look at that fuzzy pink sweater!

Rumors about Rihanna falling pregnant with rapper A$AP Rocky's baby began spreading on social media following the reports of her connection to Barbados.

Speculations were raised about Rihanna's pregnancy following her Barbados Inauguration Ceremony appearance, where she became her country's National Hero.

Rihanna was already practically roalty, but now she IS royalty. Or at the very least a National Hero.

As Barbados cut ties from Queen Elizabeth II as their head of state, the country recognized Rihanna as one of their significant figures.

Rihanna's Latest Pajama Collection Draws Flak For Its Design: 'Have Some Decency' [VIDEO]

Rihanna released a new collection of pajamas on her Savage X Fenty fashion line, but not all Twitter users are pleased with its design; what happened?

SWEET OR SCARY? Halloweekend has Officially Ended! Here are 8 Celebrities that WON the Costume Game from Doja Cat to Steve Buscemi!

Yesterday was Halloween, and Hollywood came out to play! All of the stars of your favorite TV shows and movies hit the town in their costumified regalia for this 2021 Halloweekend. Suffice it to say, we were impressed. Here are eight celebrity costumes that really blew us away this year.

Chris Brown's home has reportedly been visited once again by Los Angeles police.