The highly anticipated film Red Notice starring Gal Gadot, Dwayne "The Rock" Johnson, and Ryan Reynolds is coming out this Friday. This action packed spy film follows John Hartley, who is played by Johnson, who is forced to team up with the top two art theifs in the world who, as you may have guessed, are played by Gadot and Reynolds. The film is sure to be an instant hit. We, however, are not here to talk about that. In an interview yesterday with Collider, Gal Gadot was asked if she prefered Johnson's Tequila or Reynolds's Gin. These are the hard hitting questions we need answers to.

When asked the question, Gadot answered honestly, "Oh my god! It's uh...they're both pretty good. They're both pretty solid. It depends on what you're feeling like having, you know?" That is the perfect answer to give when you really want to toe that line. We see how she could be the top art thief in the world. She can't be surprised! When asked what surprised her most about working with her two co-stars, she said:

I don't know. I don't feel like anything. I don't think I was surprised by any of time. We've been– I got to work with Ryan and I got to work with Dwayne before so we've known eachother and we've, you know, we felt very familiar and comfortable working together, but I don't think, like, I discovered new. If anything I feel like I love them even more, and I appreciate them even more because they're both so smart adn talented and hard workers but also, at the same time, amazing family guys and fathers and...generous partners to be working with, and it was great. 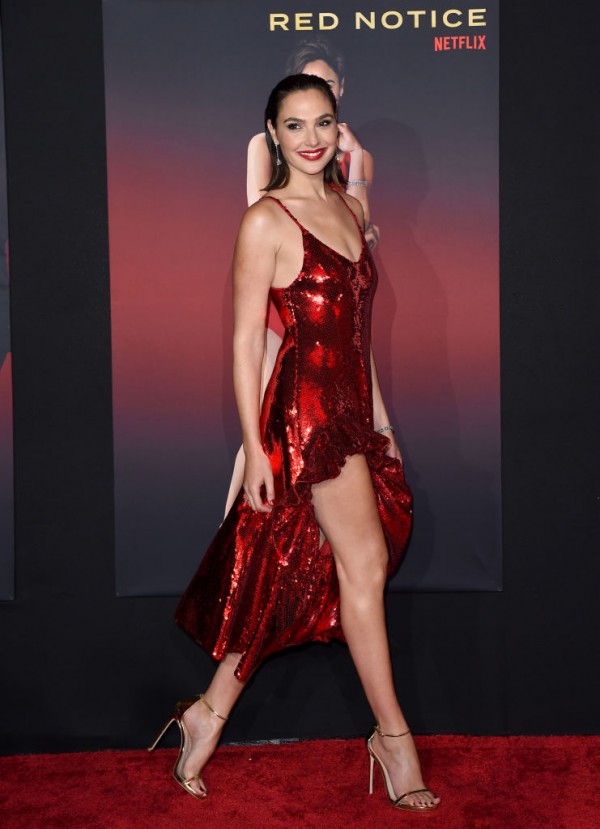 We love to see a cast that genuinely likes each other! Get ready to watch Red Notice streaming this Friday, November 12th, on Netflix.

Tags: Red Notice Gal Gadot Ryan Reynolds Dwayne "The Rock" Johnson
© 2022 EnStars.com All rights reserved. Do not reproduce without permission.
Most Popular
You May Also Like

Even the best intentions don't always play out the way you expect them to.

A PRANK ON JIMMY FALLON! Ryan Reynolds Surprises 'The Tonight Show with Jimmy Fallon' Crowds By Swapping Places with Will Ferrell!

There's never a dull moment on The Tonight Show with Jimmy Fallon, and last night was no exception. Last night, however, the person on the end of the prank was the host himself.

THE SECRET IS OUT!! Ryan Reynolds Revealed Why His Relationship with Blake Lively is the BEST THING WE'VE EVER SEEN!

Gal Gadot, Ryan Reynolds, and The Rock Are Bringing Action-Comedy Back To Theaters In 'Red Notice'

it seems like it's been forever since I was watching TV and saw a trailer for a good ol' fashioned silly action comedy -- but the trailer for Netflix's Red Notice promises funny jokes, cool fight scenes, and perhaps most importantly, the con-con-cop trio we never knew we needed.

Actress Gal Gadot has been forced to fly via private jets, traveling between Los Angeles and Atlanta to film her latest movie "Red Notice" along with her co-stars Ryan Reynolds and The Rock.