Beneath the scenic vistas of the Wyoming wilderness lies a tangled web of schemes and secrets which will slowly be uncovered when the first three episodes of JOE PICKETT drop exclusively on Spectrum (available on-demand, free and without ads) on Monday, December 6.  New episodes will continue dropping every Monday for the following three weeks until the finale on Monday, December 27.  The series will also be available to stream on Paramount+ at a later date. 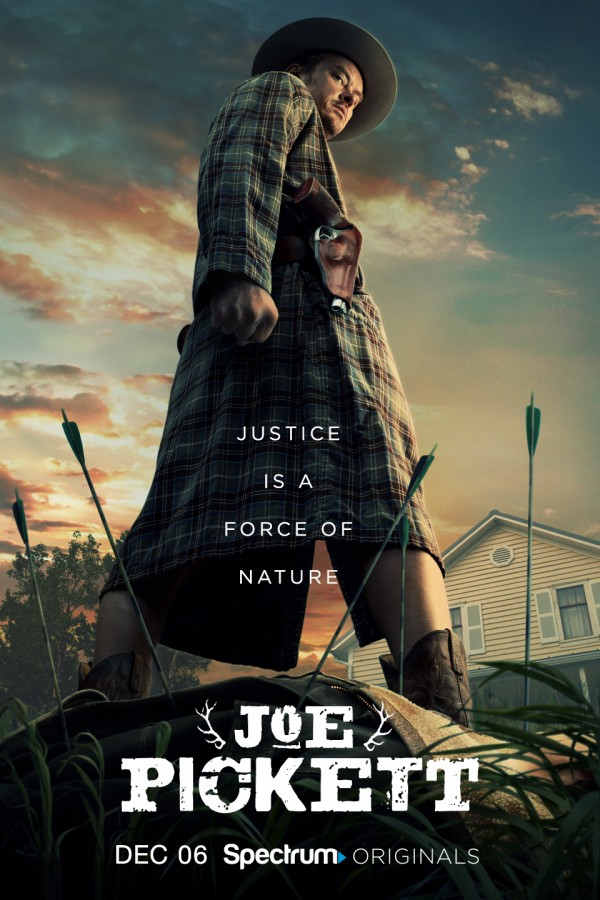 JOE PICKETT - based on the book series of the same name and led by showrunners John Erick Dowdle and Drew Dowdle and Red Wagon Entertainment's Doug Wick and Lucy Fisher - follows a dedicated game warden (Michael Dorman) and his family as they navigate the shifting socio-political climate of a small rural town on the verge of economic collapse.  When a murder victim winds up on Joe's doorstep, a larger conspiracy looms, and the Picketts find themselves in the crosshairs. Without the support of local law enforcement, Joe alone must decide what it means to be a good man and a good father in a world on the edge.

The series comes from acclaimed creators, directors, showrunners and executive producers, John Erick Dowdle and Drew Dowdle (Waco). Doug Wick and Lucy Fisher serve as executive producers for Red Wagon Entertainment.  The series is based on The New York Times #1 bestselling book series by C.J. Box, who also serves as executive producer. Box's novels have sold millions of copies in the U.S. alone and have been translated into 27 languages.

RELATED ARTICLE: Book It! Here's Why is Every Book Suddenly Being Transformed Into TV & Film

Tags: television Books drama
© 2022 EnStars.com All rights reserved. Do not reproduce without permission.
Most Popular
You May Also Like

Austin Film Festival & Writers Conference (AFF), the premier film festival recognizing the writers' contributions to film, television, and new media, is pleased to announce that it is now accepting submissions for the 2022 Screenplay, Film, and Digital Series Competitions.

What is Donald Glover Trying To Tell Us With The New Trailer For Atlanta Season 3?

Creepy And Cryptic, The New Trailer For Atlanta Season 3 Gives Us Something To Ponder

Great news for fans who were less than enthusiastic about the 20th Century Fox big-screen adaptations of The Lightning Thief and Sea Of Monsters, about the children of Greek Gods. The popular Percy Jackson young adult book series is heading to Disney+ with a director in tow to direct the pilot.

Here are a few odds and ends to help start the weekend.

What can we expect from The Wonder Years reboot?

The hit Netflix series is back with another teaser that made fans beg for more. Let's run down the released trailer and get a glimpse of what Eleven's past looks like.