It looks like we've got quite a royal scandal brewing here. Apparently, there's a new report that says Prince Charles at one point in his life was "completely infatuated" with Hollywood actress and singer Barbra Streisand so much so that some people think that they were close to having an affair.

According to Page Six on Monday, back in 1974, Prince Charles met the Funny Girl actress for the first time, after having seen the movie three times. He also kept a framed picture of her in his bedroom in Cambridge and at his private quarters in Buckingham Palace.

In fact, Prince Charles and Streisand became so close at one point that he then wife, Princess Diana, "would not have been surprised if they had an affair," said one royal source.

The revelation has been made by author Christopher Anderson, whose new book Game of Crowns is making huge waves as he is spilling all the beans with the British royal family's most guarded secrets.

Streisand herself even confirms their first encourage by later saying, "Who knows? If I'd been nicer to him, I might have been the first real Jewish princess."

Yet, the two met again 20 years later in 1994, when Prince Charles invited the actress for a "secret rendezvous at his suite" at a hotel in Los Angeles for "private tea."

One eyewitness at the time said, "The prince and Miss Streisand were very affectionate to one another." And, "Another housekeeper described Charles and Barbra as acting 'quite flustered' when she surprised them in Charles' study."

For more, pick up Anderson's book, Game of Crowns, which will be available on newsstands beginning this week. 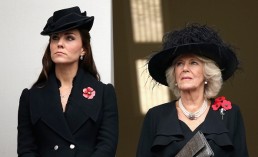 Kate Middleton Update: Camilla Parker Bowles Sparks Yet Another Feud Between Them? [VIDEO]

Kate Middleton News: Camilla Parker Bowles Has Another Reason To Be Jealous Of The Duchess? [VIDEO]