Simone Biles may be one of the World's Best Gymnasts, but that doesn't mean she isn't afraid of bumble bees.

On the heels of Biles' impressive performances at the 2016 Olympic Games in Rio, a video of the gymnast two years ago at the World Championship in China has gone viral.

I'm crying there was a bee in her flowerspic.twitter.com/PBoXyM9G3j

In the video above, Biles is seen accepting her gold medal and a bouquet of flowers, which unfortunately came with a bee, and, as The Huffington Post suggested, she reacted just as anyone in her position would.

After a fellow competitor pointed out the bee to Biles, she screamed. Then, in an attempt to get the bee off of her flowers, she shook them several times. However, the bee wasn't going anywhere and Biles ultimately resorted to drop the flowers on the ground before picking them back up once the coast was clear.

"Despite the hilarious moment, there’s no doubt Biles has been one of the stars of the 2016 Olympics. Aside from being the individual all-around, vault and floor champion, she has set a new American record for most gold medals in women’s gymnastics at a single Games," Yahoo! Lifestyle reported on Friday. "As long as there are no bees in her vicinity, this is one Olympian who looks set for a long, successful career."

For more of Simone Biles, check out the clip below of one of her recent floor performances. 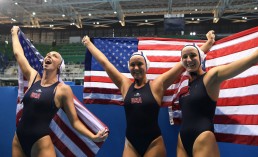 Rio Olympics 2016: 5 Most-Talked About Athletes During This Year's Games [VIDEO] 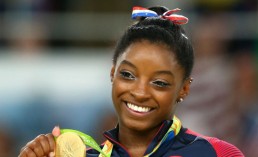 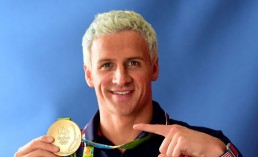