It's been just a month since leukaemia claimed One Direction Louis Tomlinson's mother, Johannah Deakin. Yet, it's only now that the singer disclosed his feelings in an interview. The 25-year-old said that he is still haunted by his mother's memory.

A month ago, Johanna's husband read out her final letter that addresses her son's global fans, who had made such a difference to his life. As soon as he learnt that his mother, Johanna, had been diagnosed with cancer, Tomlinson wanted to stop his music and spend time with her. However, she refused to let him block his musical career, according to IB Times.

"It's not something that I feel 100 percent comfortable talking too much about, but just quickly, when I first found out the news I kind of did want to throw the towel in," he said during an interview with SiriusXM satellite radio (via E! News) show on Tuesday. "But it was my mum who said to me that I've just got to keep going. She told me very sternly that she wanted me to."

Just a few days after his mother died, Louis climbed up on the stage at "X Factor UK" so that he could sing for his debut solo: Just Hold On. For this song, he had collaborated with the One Direction singer and famed DJ Steve Aoki.

"It was tough," he confessed, to E!  "But I felt like it was nice for me to almost have a little send off for her." To support him, his other co-band members, Liam Payne, Harry Styles and Niall Horan, went backstage during the show.

Recently, the One Direction cast has been going on solo careers, after making a public announcement of their hiatus. Even as Louis came out with a single debut, the single, 23-year-old Niall announced his success with another single, titled This Town.

Meanwhile, Payne is gearing up for his first child with girlfriend Cheryl as well as his first solo album. Harry, on the other hand, has just completed taping for Dunkirk, his film. It co-stars Tom Hardy and Cillian Murphy. One Direction fans can watch Louis Tomlinson and Steve Aoki perform Just Hold On in the video below. 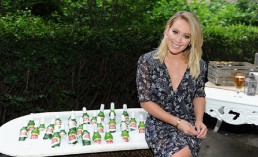