Harry Styles and Louis Tomlinson really seem to have romantic links. The timeline shows that it is the fourth wedding anniversary year of the earlier One Direction bandmates of Zayn Malik, Niall Horan, and Liam Payne.

Harry Styles and Louis Tomlinson were rumored to have got married on Sept. 29, 2013. It was a "Larry" wedding that was announced through a strange tweet by Harry Styles: "We don't need no piece of paper from the city hall," he wrote. Moreover, another friend of Louis Tomlinson's whispered partner, Ed Sheeran, had tweeted: "My best friend is getting married today. Mega awesome wicked cool."

So are Harry Styles and Louis Tomlinson really into the fourth year of their marriage? That is what the followers of the earlier One Direction bandmates of Zayn Malik, Niall Horan and Liam Payne think. Three years ago, fans tweeted extensively on the #2YearsOfLarryMarried on Twitter. That made the "Larry" wedding well-known.

However, in spite of all the rumors flying and buzzing, there have never been any real confirmations of the wedding between Harry Styles and Louis Tomlinson. A number of other rumors of Louis Tomlinson having affairs with Briana Jungwirth, Eleanor Calder, and Danielle Campbell have also done the rounds. Another frequently asked question wonders whether Tomlison is really the father of Briana Jungwirth's one-year-old baby or not, according to Celebs Now.

Meanwhile, another speculation is all about the One Direction bandmates getting back together. Unreality TV confirms that members of the One Direction band are concentrating on their solo careers. Other rumors say that Louis Tomlinson and Harry Styles will get back with Niall Horan and Liam Payne. But currently, the confusion is still not clear, as all the members are pursuing different solo careers. There is just no timeline of when they will all sing and play music together again. Fans do miss the band, though. 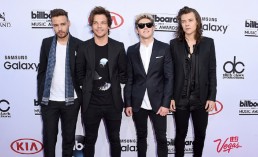