He mentioned that he used to sell insurance door to door and sold ladies shoes and pointing towards Trump he said that this guy takes a dump in a gold toilet himself, makes a joke of himself by making such statements.

The Movie star was promoting his new film "Suburbicon", a satire on race relations starring Matt Damon. Not sparing evenTrump's former chief strategist, Steve Bannon - who has been held responsible for the administration's appeal to the alt-right, called him a "pussy". He spoke about Bannon being a "wannabe writer" who could just about do anything in the world to have his script made in Hollywood.

Clooney seemed to be outraged and hit out on Hillary Clinton, whom he had endorsed during the presidential election and hosted fundraisers at home. He said that she could be more qualified than her husband but somehow could not communicate things properly and when she gave a speech, it was not powerful enough.

Earlier Trump had called Oscar-winning talented actress Meryl Streep  'overrated'. Streep had given a hard-hitting response to this and said that the current administration could serve as a valuable wake-up call."If we live through this precarious moment . . . if his catastrophic instinct to retaliate doesn't lead us to nuclear winter, we have much to thank this president for, because he will have woken us up to how fragile freedom really is', she had said.

Amal Clooney Pregnant: Is Another Set Of George Clooney Twins On The Way? [VIDEO] 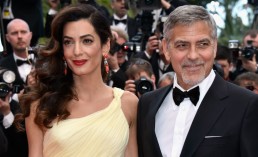