Even after their separation ex-flames Hillary Duff and Mike Comrie are spotted together on a regular basis and this time they seemed to enjoy a little co-parenting activity at Los Angeles.

Sometimes it's hard to believe that the "Lizzie McGuire" starlet who celebrated her birthday on Thursday has turned thirty though it's evident that Duff hasn't stopped herself from enjoying her life. At one end she is riding high on the success of her TV series "Younger" playing the role of Kensley and on the other end she is ardently dedicating time to son Luca as a doting mother.

Recently, Duff along with ex-husband Mike Comrie were present to cheer their little athlete at the little League field in Los Angeles. The former married couple were busy cheering for their 5-year-old son Luca and seemed to enjoy the idea of co-parenting reported Daily Mail.   .

Duff looked happy in the picture and was casually clad in a white sweatshirt and slim dark blue denims with her loose blonde tresses long enough to remind us of her days as a Disney starlet.They were busy having fun while they smiled for the photographers.

Duff and Comrie called it quits in 2014, however they are often spotted together. They were seen grabbing lunch together in the month of July and August, according to The Daily Mail. Reportedly they remained as friendly exes.

Shit. 30. Thanks for all the birthday love guys. I just ate some gluten and had a glass of wine midday

It was Duff's first public appearance with Comrie after her 30th birthday when the former teen queen took to Instagram to thank all her fans for their love and affection.

In an interview with Cosmopolitan , earlier in January 2017, she spoke about officially turning thirty. The Disney starlet confessed over the insecurities involved in aging

'I think I'm a pretty confident person. I've had a career for a long time, but I've put a lot of unnecessary pressure on myself as a woman, a businessperson, an actress,' she confessed and spoke about setting her eyes over a milestone.

'I'm like, "Am I doing enough?" Everyone I've talked to, says you come into your own in your 30's. You feel more secure. I'm looking forward to that", She did confess she's not looking forward to the physical changes of getting older though. 'I have to say, aging scares me a little bit,' she revealed.

'What's going to happen? What am I going to look like in ten years? Being 29 is already different from being 25. My body doesn't respond the same way to food or even training,' admitted Duff. 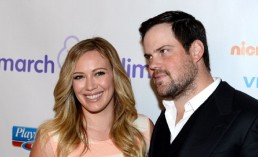