Star rapper Eminem is very proud of his daughter Hailie Scott Mathers and is happy that despite his issues with her mother and all the drama she had to see while growing up she turned out to be a successful human being.

The 44-year-old cannot get enough of her 21-year-old daughter. A source close to him has told The Hollywood Life, that after what his ex-wife Kim and he went through, he is so proud that Hailie has turned out to be smart, motivated, down to earth, and kind. The doting dad made sure that he would keep away his daughter from the spotlight and he did it. Now Hailey is an extremely responsible and balanced girl. She works hard and studies hard and was raised extremely well, the source added.

She graduated high school as valedictorian back in 2014. She had at that time given an incredible speech where she thanked both her mom and dad for providing her with support and influencing her life. She is very active on social media and is presently attending Michigan State University.

Eminem and Kim have had the most volatile relationship and a very passionate yet bizarre relationship. In fact, their relation has inspired a number of songs of the rapper which were pretty violent and explicit. The rapper rose to stardom while the ups and downs in their relationship continued. Kim met Eminem, both in 1987 fell in love after which Kim ran away from home to be with Eminem and that is when his mother Debbie Mathers-Briggs.took her in. The couple dated throughout the early '90s. Kim got pregnant in 1995 that is when Eminem/s career as a musician and rapper was about to kick off and their first and only daughter Hailie Jade Scott Mathers, was born on Christmas Day in 1995. There was a lot of stress between Kim and Em after their daughter was born and in 1996, the two split briefly.

Marshall and Kim were married in 1999. Earlier Kim had said in a talk show that she married him in order to keep him grounded during his first ever big tour. After their marriage, things got worst and apparently, the rapper became violent towards her. The duo remarried in 2006 and their second marriage ended after a few months, after which Eminem filed for a divorce and agreed to take joint custody of Hailey. However twisted their relationship maybe they somehow managed to raise a beautiful and confident daughter. 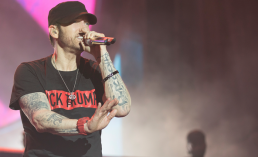