The highly-anticipated premiere of the next Star Wars film is a little over a month away, and it seems that more information from the cast members who have taken on the duty of carrying on this legendary series is being revealed.

Daisy Ridley portrays one of the main and newest characters, Rey, a scavenger from the planet Jakku, with a very mysterious background but somehow is enamoured in the ways of the force. In The Last Jedi, we will see Rey began training with the force master himself, Luke Skywalker (Mark Hamill).

During a new interview with V magazine, Ridley opened up about the 'pressure' she felt playing the role of Rey.

"I had no sense of what I was getting into. No sense of what was really going to happen. My head was so f***ed after the first one came out", she stated about the release for The Force Awakens.

She elaborated that when it was time to put back on that scavenger outfit for the production of The Last Jedi, it was a 'strange' experience.

"It was strange getting back into it, and it felt familiar and comforting, I suddenly felt really seen in a way [after the first Star Wars], which was so weird. Then, back at work, you're just you and it's not a big deal. You're just at work: You're doing your job and everyone else is doing their job. It's just me being me."

The Last Jedi, is a direct sequel The Force Awakens and will pick up from the where the previous film left off.

Ridley's character Rey, will be trained by Luke Skywalker as they prepare to fight against The First Order, led by Skywalker's nephew, Kylo Ren, played by Adam Driver, who was seduced by the dark side. It was mentioned in the previous film that Luke went into exile after the demise of all of his fellow apprentices at the hands of Ren. The Last Jedi will show the conflict Luke will face in training Rey and confronting his nephew whom he feels responsible for.

Driver recently let slip in an interview a clue as to where Rey may come from, which will also be further explored in The Last Jedi.

"You have, also, the hidden identity of this princess who's hiding who she really is so she can survive and Kylo Ren and her hiding behind these artifices," said Driver.

Star Wars: The Last Jedi will be in theaters, Dec. 15! 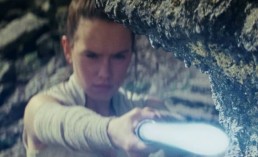 'Spoiler Alert!' Adam Driver May Have Revealed A Clue About Rey's Identity! 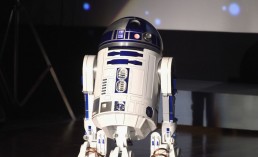 Star Wars Production Legend Dennis Muren On The 40th Anniversary: “I Had No Idea It Was Going To Be A Success”