Gwen Stefani and Blake Shelton are reportedly in no rush to walk down the aisle but according to a new report, they are allegedly hoping to expand their blended family in the near future.

According to a new report, Stefani recently fueled rumors of being pregnant already when she stepped out in Los Angeles with her two youngest children, 9-year-old Zuma and 3-year-old Apollo, in a skintight mermaid costume for Halloween on Oct. 31.

"The costume was very fitted, for sure, but it just looked like a baby bump to me," an eyewitness told In Touch Weekly on Nov. 9. "She's very fit, so it really jumped out at me. It looked obvious."

If Stefani was already pregnant, her boyfriend of two years, Shelton, would be thrilled. After all, he reportedly told a fan that he hoped to have kids with Stefani during the launch of his new clothing line, BS by Blake Shelton, at Macy’s Herald Square in New York City earlier this month.

Shelton was previously married to Miranda Lambert but because the country singer was reportedly hesitant to get pregnant, they called it quits in July 2015.

According to the magazine, the couple is "incredibly hopeful" that they will be able to conceive a child with one another, despite the fact that Stefani is 48.

"They believe there is still a chance for Gwen," the insider said. "Friends are saying that Gwen is pregnant right now... [but] friends don’t expect a pregnancy announcement until she is well into her fourth month, if not even longer than that."

"The kids talk about Blake all the time," said another source. "So Gavin asked the boys to stop talking about Blake. Gavin told Gwen that since he only has the kids half the time, he doesn’t want to be talking about his ex-wife’s boyfriend."

Stefani and Shelton met on the set of the seventh season of The Voice and during the show's ninth season, they began dating.

Stefani is already mom to 11-year-old Kingston, 9-year-old Zuma, and 3-year-old Apollo from her past marriage to Gavin Rossdale. The ex-couple called it quits with one another in August 2015 after 13 years of marriage.

While Shelton is currently appearing on the 13th season of The Voice, his girlfriend has not be seen at all during the first couple of months of episodes and isn't expected to appear on the remaining episodes of the season. 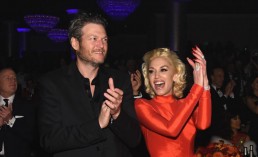 Gwen Stefani And Blake Shelton Wedding Called Off In Lieu Of An Elopement? 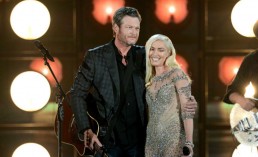 Are Gwen Stefani And Blake Shelton Getting Married? Get An Update On Their Relationship