James Corden may have just fulfilled a life-long dream: to become a backup dancer for a famous celebrity. The Late Late Show host hilariously became a backup for Taylor Swift in his show's "Take A Break: The Forum General Manager" segment.

Before meeting the "Shake It Off" singer at The Forum in Los Angeles, he first spoke to the venue's general manager and asked him if there's any way he could help out with iHeartRadio's Jingle Ball concert.

The manager told Corden that he could take his place for the night as long as he will take care of their A-list guests.

Just a few seconds before meeting Swift, Corden received a call from an unknown person who told him that one of Swift's backup dancers couldn't make it to the live show.

Corden immediately took matters into his own hands and decided to take the dancer's place. He changed to a black fishnet top and learned the steps to Swift's routine within minutes.

When Swift saw Corden wearing his black ensemble, she gave him a questioning look. Swift was unsure whether or not she should teach Corden their routine, but she eventually did so.

Corden managed to do Swift and her group's choreography with ease. When their practice was over, the host asked one of the other backup dancers if she will wear the same attire to the live show. The backup dancer said yes, and Corden looked at Swift the same way that she looked at him earlier.

Swift performed her song, "Look What You Made Me Do" at the Jingle Ball, but Corden did not actually take the stage with her and her dancers that night.

Meanwhile, Corden also had the chance to talk to Ed Sheeran, Sam Smith, Niall Horan, Liam Payne, and Demi Lovato at their respective dressing rooms before the concert.

The Late Late Show With James Corden host played security for Sheeran, and hilariously fought with his tour manager. He also ate with a group of music moguls inside The Forum's secret room.

Corden also tried to calm Smith down before his performance, and the "Too Good At Goodbyes" singer joked about feeling like he was in therapy.

Lovato and Corden couldn't also stop laughing at each other. The latter taught the former a secret handshake, and he praised Lovato for memorizing it quickly. The Late Late Show With James Corden airs Mondays to Fridays on CBS. 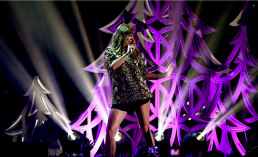 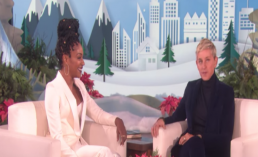 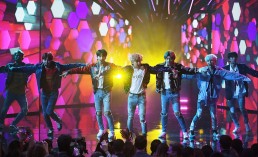