Moviegoers eager to watch the much acclaimed Black Panther are surprised, to say the least, when the movie house played Fifty Shades Freed instead.

Apparently, staff at the Atlanta's Regal Atlantic Station messed up the films at their cinema, much to the dismayed of their guests who immediately took videos and uploaded to their social media accounts the experience. Smartphones are not allowed inside the cinema but the confusion about the supposed Black Panther screening could not specifically hold moviegoers down.

One of which was user @ChefWaites who took to Twitter to share the clip from his experience. In the video, people can be heard laughing and jeering at the film.

"Aiight so this happened at Atlantic Station. They played 50 shades instead of black panther," he tweeted and attached a 15-second clip of the rolling sexy film, which, as of writing, already had more than 200,000 views.

The user also revealed that Fifty Shades Freed played for five minutes, before movie staff had noticed the mistake and made something about it. Meanwhile, some spectators of the Marvel film Black Panther, including the twitter user, found the experience funny rather than irritating.

"I never laughed so hard. I'm happy i came to the black theatre," the Twitter uploader wrote in another tweet.

Another took humor to another level when he tweeted that he was able to rush and ran out of the theater when the Jamie Dornan and Dakota Johnson-film started playing instead of Black Panther, despite having an ACL surgery five months ago.

Variety reported that Black Panther is heading for $218 million during the President's Day weekend, as per data on Sunday, on the more than 4,000 locations in North America. Impressively, this was a far cry from the expected amount of $100 to $120 million, which was released in January.

With this, it has beaten past record holder, 2016's Deadpool, which got $152 million. Prior its release, the film garnered 5 million tweets, snatching the title of being the most tweeted movie of 2018.

Black Panther is directed by Ryan Coogler and stars Chadwick Boseman as the titular character. Other cast members are Lupita Nyong'o, Michael B. Jordan, Danai Gurira, and Daniel Kaluuya. 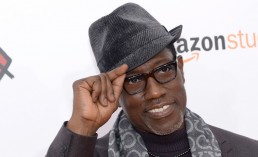 Wesley Snipes Is 'Ecstatic' About 'Black Panther': 'Excited Is Definitely Not The Word'