Big sisters will always be there! Following the birth of Khloe Kardashian's daughter, her sisters Kim and Kourtney came up with an expensive gift basket to officially welcome her first child to the family.

It was also her sisters' gesture of supporting her during this time.

As per reports, Khloe gave birth to her daughter on Thursday, April 12. This is the first child for the 33-year-old Revenge Body host, but the second for her boyfriend, NBA player Tristan Thompson, as he already has a son with his ex-girlfriend, Jordan Craig.

Khloe's Daughter Gets A Welcome GIft

According to TMZ, the gifts from Khloe's sisters were placed in a $5,000 Noitte Fatata custom bassinet, which was from a baby boutique in Beverly Hills, California, called Petit Tresor. The care package reportedly includes bath and body products for both mother and daughter, as well as leopard print blankets, pillows, and a robe for both Khloe and the baby.

Prior to the birth of Kardashian's baby girl, Thompson was accused of cheating on the reality star with a woman whose name is Lani Blair. Thompson and Blair were first spotted together at a nightclub in New York City over the weekend and then caught entering and leaving the athlete's hotel later that night.

As soon as Khloe began to have contractions, her mother Kris Jenner and Kim and Kourtney rushed to Cleveland to be by her side, especially since videos surfaced just days before she went into labor that suggested Thompson was being unfaithful.

Kim and Kourtney Head Back To Los Angeles

Now that Khloe's daughter has arrived safe and sound, it appears that Kim and Kourtney have decided to make their way back home. Those that follow the two know that they were recently vacationing in Turks and Caicos together, along with Kourtney's 24-year-old beau, Younes Bendjima, and her 5-year-old daughter, Penelope Disick.

Neither Kim nor Kourtney has said anything about their new niece nor commented on Thompson's cheating scandal, but Kris Jenner and Kylie Jenner did take to social media to congratulate the new mom.

Kylie took to Snapchat as she drove down a long road and added a special filter for the first-time mom.

"Kongrats, Khloe! It's a Girl," the filter read.

Then, Kris took to Twitter to share a throwback video of her daughter, Kendall Jenner, in which she continuously repeats the word, "baby."

BLESSED!!! #Repost @wmag ・・・
When three of your sisters give birth in under a year. Congratulations to @KhloeKardashian on welcoming another girl to the KarJenner clan.
- pic.twitter.com/6kdMEYG4V1 — Kris Jenner (@KrisJenner) April 12, 2018 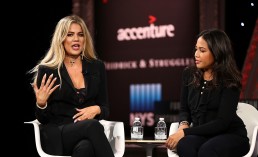 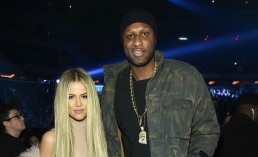