Apparently, Williams wasn’t impressed by one of Gomez’s appearances recently. Paparazzi spoke with Gomez recently, and Williams said that the interaction proved Gomez still has a lot of growing to do.

She first gave Gomez the benefit of the doubt and said the actress and singer could be having trouble with her celebrity status lately, especially when it comes to her health concerns. Still, Williams couldn’t help but throw shade at Gomez’s voice in the clip.

“I didn’t think it was ‘child-like,’” said Williams. “In fact, it sounds like [the paparazzi] girl had the same voice. A lot of you girls think it’s so cute to squeeze your voice and talk like [that.] ‘It’s so childish.’”

Williams seemed to move on from Gomez’s voice to her past with The Weeknd and Justin Bieber but then circled back to her original topic of conversation.

“The thing is, if she has that same voice at 50, I’m gonna punch her in the throat!” said Williams. “Baby talk, baby talk, it’s a wonder you can walk.”

The moment Williams was referring to was when paparazzi caught up with Gomez as she was leaving a Starbucks in Newport Beach, California, and swarmed her with questions about her on-again-off-again boyfriend, Bieber. Gomez gave the paparazzi an unexpected response.

“Do you guys mind if I just have the rest of the day?” said Gomez. “Because you’re kind of scaring me.”

Selena's Love Life In The Spotlight

While Gomez asked the paparazzi to back off amid her alleged drama with Bieber, she reportedly started getting close to Jennifer Aniston’s soon-to-be ex-husband, Justin Theroux. Headlines claimed that Theroux and Gomez were sending flirty texts to each other now that both of them are back on the market. Insiders alleged that Theroux’s supposed connection with Gomez would only stir up trouble with Aniston, as the actress thought Gomez was more of her friend than Theroux’s.

A representative for Theroux shut down those rumors and said while Gomez and Theroux have gotten acquainted with each other, they met through Aniston, so nothing romantic is going on between them, and they don’t plan on changing that.

Rumors about Gomez and Theroux sparked after Theroux mentioned Gomez on Instagram when he visited an animal shelter in her hometown. 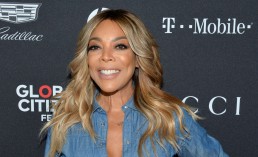