Redmond reportedly threatened the clerk with a knife and demanded money from the cash register. The employee obliged, and the suspect fled the store.

However, the authorities apprehended him nearby soon after in response to a Good Samaritan's call about a robbery. Apparently, the police were already notified about the robbery early on when the anonymous caller became suspicious of Redmond's behavior.

According to the 7-Eleven employees, Redmond had been scouring the store for hours before he made the robbery. He even bought a Slurpee.

The cops heard everything that happened in the store on the other end of the line. They were on the phone with the bystander when Redmond pulled the knife at the clerk. He fled with $60 from the cash register. Thankfully, no one was harmed, including the Good Samaritan and the employees.

The police found Redmond in possession of a knife that matches the description the clerk gave of the weapon used in the robbery.

Redmond is being held in custody under probation hold and without bail at the Los Angeles Police Department. According to his arresting documents, his bail would have been $50,000. The LAPD said his case will be turned over to the District Attorney's office. Redmond will appear before a judge on Thursday, where it will be determined if he will be released or granted bail.

Troubles With The Law

This is not Redmond's first run-in with the law. The son of the late Charlie's Angels star and actor O'Neal had struggled with drug addiction for most of his adult life. He was sentenced to three years in jail in the California Department of Correction and Rehabilitation in July 2015 after the judge revoked his probation in May 2015. It was discovered that he had violated the agreements in the violation when he used drugs and did not follow up with doctor appointments.

According to O'Neal, his son's troubles stemmed from the loss of his mother. Redmond never recovered from the death of Fawcett in 2009. 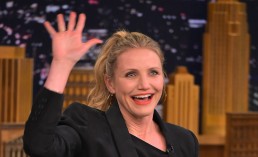 Cameron Diaz Retires From Acting To Focus On Her Husband, Benji Madden