The evidence that Bella Hadid and The Weeknd have rekindled their romance continues to mount. Now, they appear to be low-key Instagram official.

Rumors Have Been Circulating For A While

The two originally hooked up back in 2016 but were first linked the year before, with fans hoping they'd get back together ever since they called it quits. They split after a year and a half of dating, blaming their conflicting schedules and not getting to spend enough time together.

The Weeknd was linked to fellow singer Selena Gomez in January of last year after the two were spotted making out by some dumpsters in Santa Monica. Just a few months later, the R&B star was spotted leaving Hadid's New York apartment, sparking rumors they were back together in the wake of his split from Gomez.

Rumors first started swirling that a Weeknd-Hadid romance may be back on when the two were allegedly spotted kissing at Coachella in April, following the musician's set at the festival. Hadid emphatically denied the story, replying to a tweet from E! News by simply telling them it wasn't her.

The supermodel's denial was called into question, however, when just last month the two were spotted getting cozy at Cannes. This time around, there was a photo to back it up. The two were kissing passionately at an after party for the esteemed film festival, making it clear they were more than friends.

It seems like the exes are giving it another shot, but they're trying to keep things under wraps for the time being. Thursday saw a very pixellated photo hitting the Internet, which seems to show a Paris date between Hadid and The Weeknd earlier that day.

According to the Daily Mail, the two enjoyed a fancy meal together at the hip restaurant The Bistrologist. Hadid was model-cool in an oversized red blazer and matching skirt, while her R&B superstar partner stuck to his typical black-on-black look for the occasion.

Then, on Saturday, the 28-year-old singer posted an Instagram Story featuring a pair of female, well-manicured nails holding a sugar packet emblazoned with "Sugar Daddy." Fans did some snooping and discovered that those nails belong to none other than Bella Hadid. Neither party has confirmed or denied just yet, but it seems that this is their way of becoming Insta-official.

If nothing else, at least the rumors about Hadid seeing rapper Kyle behind The Weeknd's back can now be put to rest. The two had exchanged numbers, but Kyle dismissed claims they were dating, advising that the two were working together on community relief for their shared hometown following a rash of fires in the area. 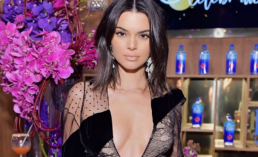