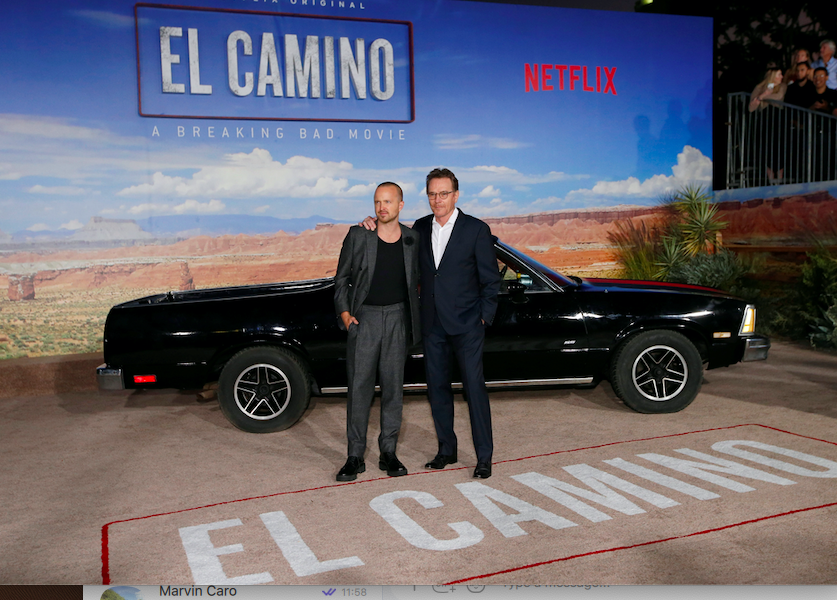 After months of speculation and internet teases, all Breaking Bad fans are set to be rewarded. This Friday, October 11, Netflix will drop "El Camino: A Breaking Bad Movie."

The movie will finally answer the biggest question: "What happened to Jesse Pinkman after the series finale?"

Here's a quick recap of the entire series.

Aaron Paul, who plays Pinkman, revealed in a recent interview that during outside shoots, they had to wear hilarious-looking cloaks that made him feel like they're on the set of "Star Wars."

The sequel movie will revolve primarily on Jesse Pinkman's life after "Breaking Bad." The much-awaited and top-secret film sequel was shot in New Mexico last year.

When Paul got the script, the title was "Vince Gilligan 'Special Project." The project was a top-secret that even some of the actors weren't able to get complete scripts and were checked into different hotels using fake names.

They also filmed phony scenes. It was to ensure that nobody -- as in nobody! -- would have a clue what the movie was until filming was done.

Based on the movie trailer, the film will follow what happens to Jesse after escaping from the white supremacist captors at the end of the TV series.

How About Walter White?

Another question remains: Is Walter White going to be in the "Breaking Bad" movie?

Paul and Bryan Cranston reunited at the red carpet premiere of the movie, which still raises speculation whether or not Walter will be in the film.

We learned six years ago what White's fate was. He was shot in the finale and the character died. The 2013 finale showed the character bleeding on the floor after sustaining a gunshot wound and later swarmed by police.

Many are still hoping that White will always be part of the movie. Even though he died on the last episode, it doesn't mean he won't make a cameo, at least.

Although a cameo could be possible in the movie, it will likely be only in the form of flashbacks, as seen on the trailer.

There will also be familiar faces in the movie, such as Charles Baker as Skinny Pete, Jonathan Banks as Mike, Larry Hankin as Old Joe, and Matt Jones as Badger.

Badger and Skinny Pit reminisced about the series that now turned into a movie. Talking to a behind-the-scenes featurette, they described the feeling as if they were "going back to your high school reunion if your high school sold meth."

The Breaking Bad series aired from 2008 to 2013. It followed Walter White (Cranston), a science teacher who, after being diagnosed with lung cancer, started cooking methamphetamine to ensure his family's financial future.

With the help of Pinkman, his student, both became major criminal drug dealers.

El Camino will be on Netflix, but it will also be available in theaters.