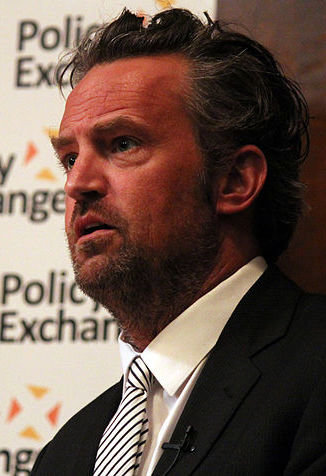 Matthew Perry was spotted on a date with a mystery woman in a restaurant in Los Angeles ... but the humorous Chandler Bing does not look happy, not even close.

The "Friends" star was seen standing outside an Italian restaurant in West Hollywood. He and his date just got out of a casual dinner date on Sunday, November 3 in one of the restaurants owned by Dan Tana.

Matthew Perry was wearing a white T-shirt, black pants, blue flannel and a pair of dark Converse. His hair looked strangely messy. Fans barely recognized him while walking with his date outside, and those who have seen him described him as looking exhausted.

His date was wearing something casual as well. She was seen in an all-black outfit, a pink scarf and a pair of Converse too. Perry was seen wrapping his arm around the woman's waist, trying to be intimate. In the photos released by RadarOnline, the two can be seen making casual conversations with friends before they were spotted moving together in a black car.

When Perry was in his prime, he was known to have dated a string of women, including Yasmine Bleeth, Rachel Dunn and Julia Roberts to name a few. The last public relationship he had was with Lizzy Caplan of the Mean Girls. It lasted from 2006 to 2012.

Since their break-up, Perry stayed mostly out of the limelight. It is also public knowledge that the actor has long battled with drug addiction and alcoholism -- a very dangerous combination. Matthew Perry was allegedly caught by a hotel staff drinking in one of the New York Hotels he lives in.

"He didn't want anyone disturbing him, so he would go to parts of the hotel where on the VIPs are allowed," an insider of Radar Online said.

Those who witness his drinking could hardly recognize him as one of the leading characters in the hit TV series "Friends." He looked like such a mess compared to how people remember him. Sources said that he often kept himself in the dark and would only come out of his room for some cigarette if not for a hospital appointment.

One time, he tweeted telling people that they could continue making fun of him and his problem with alcoholism. It was then when he decided to focus on working on his sobriety.

Matthew Perry and the woman he was out on a date with hopefully have each other to lean on to. As he works on his sobriety, his fans remain hopeful that the actor could get over it and back at his feet.

READ MORE: Jennifer Aniston on 'Friends': 'I Will Be Nothing Without It!'