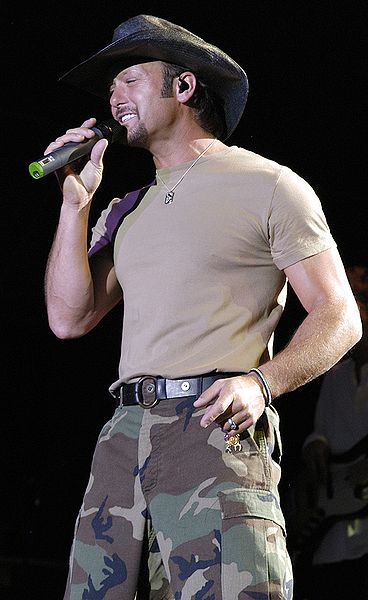 Tim McGraw is a picture of good health, and he is certainly at his healthiest. In his new book, he talked candidly about his weight loss journey and how his wife has "inspired" him to be at his best.

In his book -- "Grit and Grace: Train the Mind, Train the Body, Own Your Life" -- that came out Tuesday, McGraw revealed that over ten years ago, his wife Faith Hill gave him an ultimatum that changed his life.

Hill made him choose whether he would live the rockstar life or be the family man that he is. The threat shook McGraw to the core. He knew then what he needed to do.

Tim opened up about how he tried his best to change his life for the better. He realized that if one puts his heart and soul into something, he can do it.

In an interview with Hoda Kotb on the TODAY show, he revealed that he was "living the life" with great shows and all the after-parties here and there. However, when he came home and his wife told him that he was partying like there was no tomorrow and that he is getting a bit overboard, it had a huge impact on him.

However, Mcgraw revealed that while what his wife told him made him think, it was his daughter's reaction to an unflattering image of him that made him stop and think.

McGraw detailed that when they were going out to watch a movie during the holidays, his daughter Gracie saw him on the big screen. The trailer of the movie he did came out and Gracie turned to him and said, "Jeez dad, you need to do something about this" -- referencing to his overweight look.

Of course, McGraw described it as a gun shot straight to his heart. It got him.

In his book Grit and Grace, Tim opened up about how he lost all the extra 40-lb weight. He also explained how this weight loss turned his life around and made him healthier.

According to McGraw, he started by just walking every day. Then, he started a regiment that lowered his stress and challenged his body. McGraw revealed that he worked with Roger Yuan, a competitive martial artist and movie-fight coordinator to put together a "maverick" workout routine.

Included in his book are step-by-step tips to help train the mind. McGraw also added some easy-to-cook recipes that everyone can do at home.

What is woven into this health guide of a book are stories of his personal life and how the weight loss journey helped him and his family.

The beginning of change may have come from a threat that his wife made to him, but in the end, it resulted into something great. Today, Tim McGraw talks about his health and fitness journey, and all that he could be is grateful for his wife and children who have been there for him throughout.