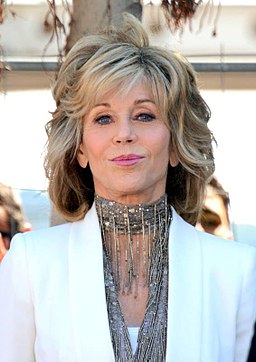 After years of swerving from her "Hanoi Jane" days, Jane Fonda is back at it as a political activist. She is bold and unafraid just as she was in the '70s.

The cause Fonda fights for now holds greater importance. What she can accomplish will be to the advantage of generations to come. It is a love for the environment and the next generations that fuel the celebrity to fight.

Not even the testimony of over 11,000 scientists on the state of climate emergency can convince Trump. Apparently, Trump perceives the science of climate change as a mere hoax.

Fonda leads "Fire Drill Fridays" together with Oil Change International and "Remove Trump" every Friday. They march from Capitol Hill to the White House. The actress even moved closer to D.C. to be at the epicenter of the fight for climate change.

Protestors believe that Trump is paid for by the fossil fuel industry. As such, the "oil president" must be removed for the sake of the environment.

The 81-year-old drew inspiration from 16-year-old Swedish activist Greta Thunberg. Fonda stands unafraid to risk arrest: "We can't leave it to the youth to fight for their future by themselves."

Five Strikes, You're Out

The Golden Globe Award winner is not one for violence. She fought so hard to stop the U.S.-Vietnam War in the '70s. Though Hanoi Jane faced treason then, she continued to fight boldly for what she believed was right.

Now, she initially planned to get arrested for 14 times. On the third Friday that she stepped out in protest, she faced 20 hours jail time. Fonda also received an open court date this month. Her fourth arrest put her at risk for facing 30-90 days in prison.

At this point, the protest organizers urged her to put an end to her arrest streak. They needed her by their side, not in jail. So on the fifth Friday of the political strike, Fonda avoided jail time when she stepped away before the police gave her the third warning.

Using Her Influence for Awareness

In addition, Jane Fonda is set to resume production of "Grace and Frankie" Season 7 in two months' time. Her TV presence may help boost awareness for what her group is fighting for.

To date, Ben Cohen and Jerry Epstein of Ben & Jerry Ice Cream have already joined Fonda's group. They have been sounding the alarm for climate change for years, but seeing Jane in protest made them realize they needed to do more.