Despite tensions between the royals, all were present for Remembrance Day services that happened this weekend.

The service honors armed forces and victims of wars and conflict.

Fans were delighted to see their favorite royals back together on Saturday months after not being seen together.

The so-called Fab Four -- William, Kate, Harry and Meghan -- were all smiles as they arrived, though it comes after months of tension between them.

The Wales brothers were reportedly in a rift, which was made worse by the recent ITV documentary of the Duke and Duchess of Sussex.

On the other hand, Kate donned a black over-the-knee dress with a bateau neckline and a velvet ribbon tied around her waist. She paired it with black pumps and the Queen's diamond stud and pearl drop earrings.

But while the royal fans were excited to see them all together, once they stepped inside, the Sussexes took their seats on different sides of the royal box to the Cambridges. They are far away from each other, on opposite sides of the Queen.

The Queen is always in the centre on events like this. 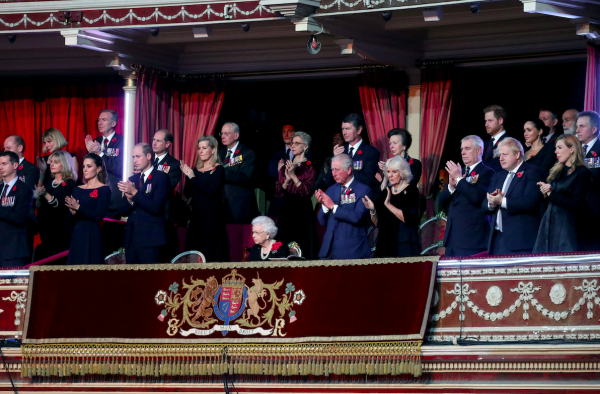 Since Prince William is second in line to the throne, he and his wife get the honour of sitting next to the monarch's right. Prince Charles, who is first in line, sits in his mother's left.

Meghan and Prince Harry were separated from the royal family. They were seated behind them further back, together with Prime Minister Boris Johnson and his girlfriend Carrie Symonds.

Prince Harry is sixth in line to the throne, behind Prince George, Princess Charlotte and Prince Louis, hence, why he was sat at the other end of the balcony.

Around the Queen were Prince Edward and Sophie, Countess of Wessex, Sir Tim Lawrence, Princess Anne and Birgitte, Duchess of Gloucester.

Last year, the Sussexes and the Cambridges were seated in the same area of the royal box but were at the opposite sides of the Queen.

This year, however, the couples were separated -- potentially indicating the extent to which the tensions between the Royal Family and Meghan and Harry have risen.

READ MORE: Meghan Markle Deliberately Stayed Far Away From The Queen at Remembrance Ceremony -- Why?